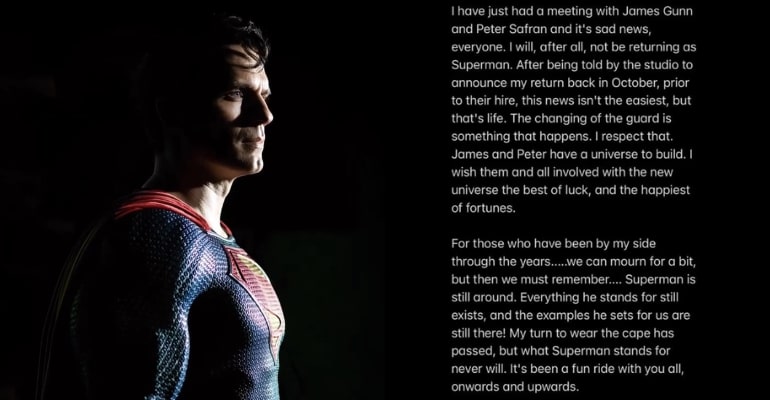 HOLYWOOD, USA — In a sombre post on his Instagram page, British actor Henry Cavill shared the news that he will not, after all, return as Superman in the DC Extended Universe (DCEU).

Cavill wrote his announcement after he met with filmmaker James Gunn and producer Peter Safran, the new leaders of the DC cinematic franchise.

“I have just had a meeting with James Gunn and Peter Safran and it’s sad news, everyone. I will, after all, not be returning as Superman. After being told by the studio to announce my return back in October, prior to their hire, this news isn’t the easiest, but that’s life. The changing of the guard is something that happens. I respect that. James and Peter have a universe to build. I wish them and all involved with the new universe the best of luck, and the happiest of fortunes,” the actor said.

Despite the sad news, he still told fans that “Superman is still around.”

“For those who have been by my side through the years….. we can mourn for a bit, but then we must remember…. Superman is still around. Everything he stands for still exists, and the examples he sets for us are still there! My turn to wear the cape has passed, but what Superman stands for never will. It’s been a fun ride with you all, onwards and upwards,” Cavill continued.

“Hope to catch you in another universe, sir. 🙏” said Levi.

It can be noted that Cavill surprised fans in October with his return as Superman when he made a cameo at the recent DC Film Black Adam starring Dwayne “The Rock” Johnson.

In his Instagram post, he teased fans about his return as the iconic character. The actor’s supposed return is reportedly due to Johnson’s efforts, who appealed to the heads of Warner Bros.

The Black Adam actor also shared his excitement about the face-off between his character and Superman. However, with the new direction that the DCEU is going with its new leaders, that plan may take a while or not happen at all.

At the moment, Peter Safran and James Gunn announced their plans to create a young Superman movie, which is the main drive in Henry Cavill’s exit from DC.  – WhatALife!