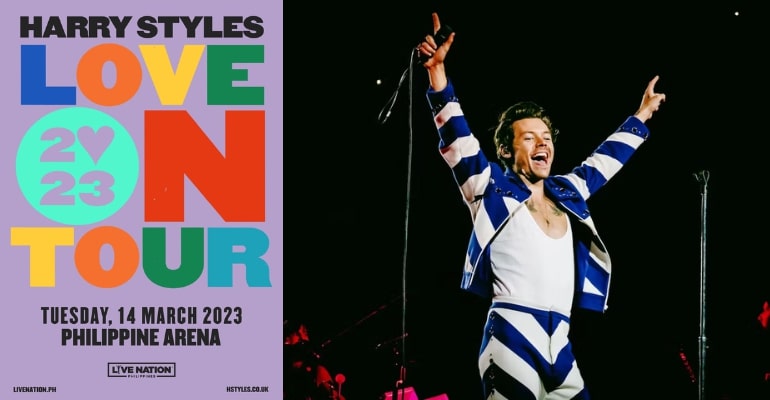 Just in: Harry Styles is coming to Manila for his Love on Tour concert on March 14, 2023, at the Philippine Arena!

MANILA, PHILIPPINES — Event producer Live Nation has just announced that Harry Styles’ Love on Tour Concert is set to arrive in Manila on March 14, 2023. The concert will be held at the Philippine arena.

Tickets Pre-Sale will begin November 23, 2022, at 12 pm. Fans are required to register for a Live Nation Account to get Pre-Sale access.

Meanwhile, General On-Sale is scheduled on November 24 at 12 pm.

Visit the official Live Nation website to get started.

Ticket prices for Harry Styles’ Love on Tour Concert in Manila are yet to be released. However, based on a post by Bandwagon Asia, the following are ticket prices for the Japan Concert:

Please standby for official ticket prices for the Philippine concert.

Check out the official post by Live Nation here:

The tour has seven leags spreading over the course of almost two years, starting from September 2021 in Las Vegas, USA. It will finish on July 2023 in Reggio Emilia, Italy.

Other than the Philippines, included in its Asia Tour are Japan, Singapore, Thailand, and Korea. – WhatALife!