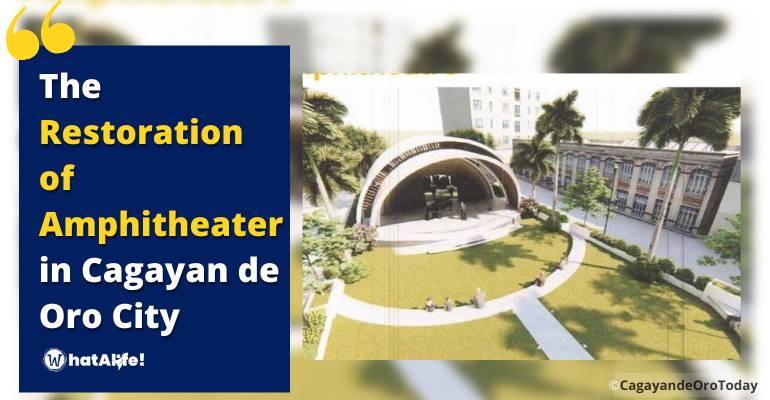 CAGAYAN DE ORO CITY, Philippines — The city government displayed the city’s fully repaired amphitheater on Monday afternoon, February 28, a historical landmark that has been the location of many political debates and anti-Marcos protests.

The late mayor Justiniano R. Borja created the Cagayan de Oro Amphitheater, which is the city’s replica of Manila’s Plaza Miranda, in 1958. It was destroyed in 2010 under the mayorship of lawyer Constantino Jaraula to make room for an unfinished construction project.

In 2019, city hall began restoration work on the amphitheater as part of a larger project to upgrade the plaza and complement a neighboring Cagayan River promenade being built by the Department of Public Works and Highways (DPWH) under Project Lunhaw.

“Lunhaw,” which means “green, bright, and lush,” is a multi-agency initiative to offer a recreational area and urban green spaces on a multi-billion-peso flood control project along the Cagayan River with the support of the United Nations-Habitat Philippines.

The Cagayan de Oro Ampitheater and Plaza Divisoria, according to Senator Aquilino Pimentel III, who helped fund the project, are part of the city’s history, culture, and heritage.

Pimentel further mentioned that his colleague senator, Filipino boxing legend and current presidential candidate Manny Pacquiao, used to fight at the amphitheater’s then-weekly Boxing in the Park event years before he came to international recognition.

“This is a very historic place. This is our democratic space. All can use this space,” Pimentel said.

The Amphitheater and Plaza Divisoria are at the heart of the current project, which spans numerous towns from Barangay Consolacion to Barangay Macasandig.

“It is going to be a walkable, cyclable, continuous, seamless pedestrian-centered riverside park, much like in Bonifacio Global City in Taguig,” Cagayan de Oro Mayor Oscar Moreno stated.

He said that the historic Plaza Divisoria and the riverside park will receive a large portion of the P1.13 billion allotted for Project Lunhaw.

“The whole plan is something that is for world-class tourism. If we have a sustainable space where we can also showcase our arts and culture, that is going to be a big plus for Cagayan de Oro,” Department of Tourism (DOT) director for Northern Mindanao Marie Elaine Salvaña-Unchuan said.

Also Read: What is Ash Wednesday, its history, and how it’s honored in Christianity?