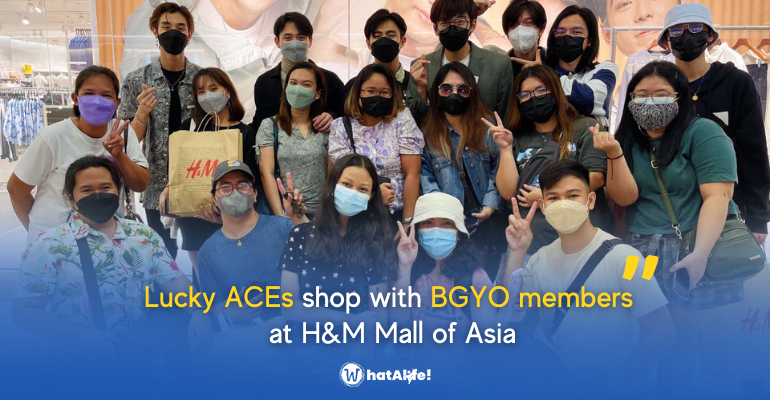 MANILA, PHILIPPINES — The P-pop boy group invades an H&M store in the Philippines for the Music x Me campaign that showcases Filipino music artists. On March 1, 2022, lucky fans (ACEs) were able to shop with their favorite BGYO boys.

BGYO under Star Magic, ABS-CBN, is a trending Filipino 5-member group here in the country. The BGYO members Gelo, Akira, Nate, JL, and Mikki, are now among the faces and endorsers of the well-known clothing company and brand H&M. Their affiliation with H&M is connected the brand’s Music x Me campaign that aims to showcase Filipino music artists.

The BGYO’s event announcement on Twitter with hashtag #BGYOinvadesHM became one of the top trends yesterday. ACEs, a group of fans loyal to the P-pop group, was thrilled to hear about a surprise announcement by H&M Philippines over on Twitter.

“An exclusive surprise! Lucky ACEs have been chosen to shop with our Best Boys! #HMMusicxME,” tweets H&M.

An exclusive surprise! Lucky ACEs have been chosen to shop with our Best Boys! #HMMusicxME

Join us here Twitter to have a sneak peek of what’s happening using the hashtag #BGYOinvadesHM pic.twitter.com/7vaaRY290B

Immediately after, the hashtag #BGYOinvadesHM went trending due to the excitement of the group’s official fandom ACEs.

BGYO with its Lucky ACEs in H&M

The event brings an exclusive surprise to the ACEs, where lucky fans were chosen and given a chance to shop with their idolized group members in the SM Mall of Asia H&M Philippines store.

Our personal shoppers waiting for the lucky ACEs earlier at H&M Mall of Asia! ? #BGYOinvadesHM #MusicxME

Stay tuned for more photos within the day! pic.twitter.com/FNK7D4MQn0

Also, the lucky ACEs were able to get a chance to have the members as their personal shoppers and have their H&M paper bags signed by all the BGYO boys. Many of the fans could not contain their happiness, and immediately shared their experiences on social media with hashtags that went skyrocketing as a trend on Twitter.

One lucky ACE tweeted, “And finally i met more ACEs together with best boys!!”

And finally i met more ACEs together with best boys!!

To my co winners i wanna know your usernames pls wahahaha

Congrats to the Lucky ACEs! The WhatALife team can only say “Sana All!” – WhatALife!

Also Read: BGYO is the new face of H&M’s Music X Me campaign