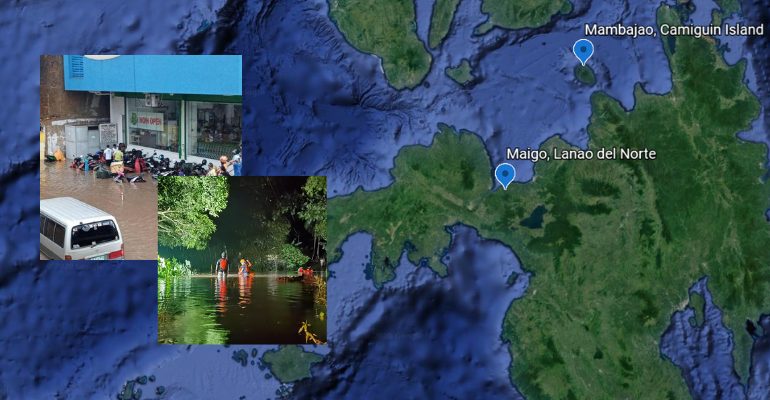 The streets in the capital of Camiguin Island and a town in Lanao del Norte were submerged in floodwaters following heavy rainfall on Tuesday, January 12.

A low-pressure area (LPA) brought flash floods to some areas in Camiguin Island and Lanao del Norte provinces on Tuesday.

In its 11 PM bulletin, the state weather bureau has placed the two provinces, along with Bukidnon, Misamis Occidental, and Misamis Oriental, under “Yellow Warning” due to the rains caused by the LPA as a result of the “tail end of a frontal system.”

Under the weather bureau’s rainfall advisory, a yellow warning is raised when the expected rainfall amount is between 7.5 mm. and 15 mm. within one hour and likely to continue.

Capt. Arnold Gaabucayan, municipal police chief of Mambajao, Camiguin, said water from canals and creeks overflowed, flooding the streets and houses in at least five villages, with Barangay Poblacion as one of the hardest hit.

“So far, there were no reports of damage to properties and houses,” he said in a phone interview, adding that residents in affected areas were quick to evacuate as it was daytime.

A team from the provincial disaster risk reduction and management office gave out food packs and bedding materials to the evacuees.

In a statement he posted on social media on Tuesday evening, Camiguin lone district Rep. Xavier Jesus Romualdo said the constant dredging of the province’s streams and waterways “greatly helped lessen the flooding.”

“Our flood control structures and systems proved to be effective and of excellent quality. The fact that these structures did their job of mitigating the flooding and enabling the floodwaters to subside in a few hours (and, not to mention, maintain their structural integrity despite the constant strong rush of water) easily belies and debunks the malicious lies that our infrastructure is substandard,” Romualdo said.

Water levels reached as high as a person’s chest, and in some areas, almost up to houses’ ceilings.

The Lanao del Norte Electric Cooperative, in a statement, said the power mainline had to be turned off due to the heavy rain, causing a power outage in some areas of the province.

After midnight, the rain stopped and the flood eventually receded.

Tuesday’s flooding was the second incident in the province this week.

The first occurred on January 11 in Tubod town where three barangays were affected, prompting residents to evacuate.