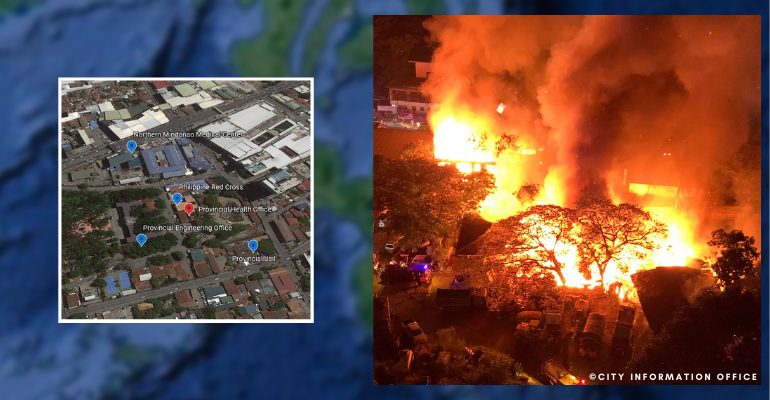 A fire broke out and destroyed Misamis Oriental’s Provincial Health Office along with COVID-19 vaccines in Cagayan de Oro on Wednesday night, April 14.

The building is inside the provincial government compound in downtown Cagayan de Oro City, just a block from the Northern Mindanao Medical Center, the region’s main COVID-19 referral facility, and a major mall.

According to the investigation made by the Bureau of Fire Protection, the fire originated from a motorpool kitchen at the back of an old building occupied by the Provincial Health Office. The motorpool is under the Provincial Engineer’s Office.

Investigators said the cold storage for the vaccines was still intact. However, Provincial Board Member Gerardo Sabal III said the vaccines, all CoronaVac, were considered wasted because of the intense heat.

Sabal said there were at least 30 vials of CoronaVac kept inside the building.

He said important data on COVID-19 and other public health matters were also lost and would slow down the Provincial Health Office’s work.

“These can be restructured, but this fire will stall us momentarily,” Sabal said in an interview with Rappler.

The fire broke out at around 6:30 PM and was declared under control two hours later.

At the height of the blaze, Misamis Oriental provincial warden Roy Bahian ordered jail guards to prepare for the evacuation of over 400 inmates if the fire got near the facility.

Meanwhile, the Philippine Red Cross Misamis Oriental – CDO Chapter informed the public that “the wiring of the Molecular Laboratory’s Negative Pressure was damaged preventing our laboratory analysts to conduct testing of the samples.”

“Swab and Saliva samples will be sent and tested in Philppine Red Cross Zamboanga City Molecular Laboratory,” the agency added.

Authorities were still assessing the extent of the destruction, but investigators placed the initial structural damages at P1.4 million.