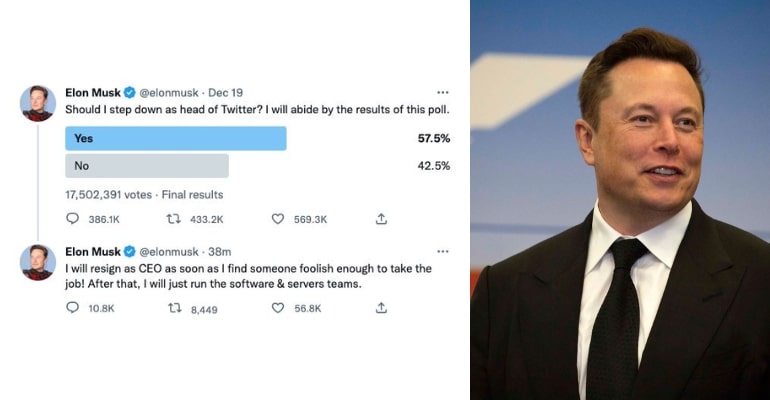 USA — Today, December 21, 2022, billionaire Elon Musk declares his decision to resign as Twitter CEO as soon as he finds someone “foolish enough to take the job.”

The decision comes after the result of his December 19 poll asking Twitter users whether he should step down as head of Twitter.

He also declared that he would abide by the results of the poll.

In response to the final results, Musk tweeted his decision today.

“I will resign as CEO as soon as I find someone foolish enough to take the job!” he tweeted and added, “After that, I will just run the software & servers teams.”

At the moment, his resignation tweet has over 78,500 likes and counting.

Last October, Elon Musk officially became the owner of Twitter Inc. One of his first moves was to fire key Twitter executives.

Some of the most notable executives forced to leave their positions were CEO Parag Agrawal, CFO Ned Segal, general counsel Sean Edgett, and head of legal policy, trust, and safety Vijaya Gadde.

To celebrate his takeover, he tweeted, “the bird is freed.” Musk also added a video while carrying a sink with the tweet, “Entering Twitter HQ – let that sink in!”

His time as CEO of the social media platform has been turbulent ever since. – WhatALife!