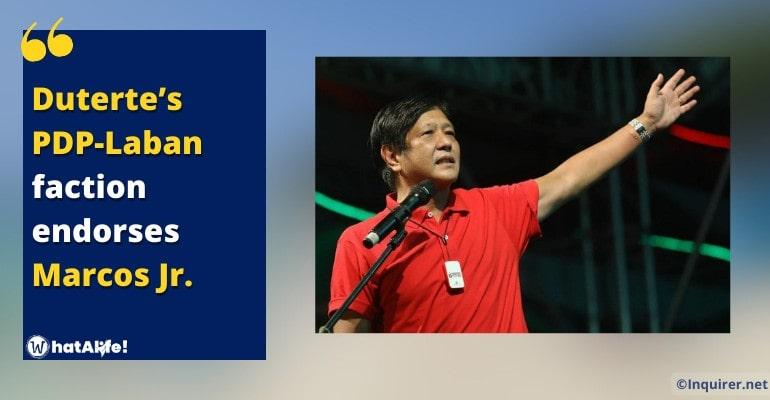 The resolution stated, “He is the candidate whose vision of governance is the most aligned with PDP-Laban’s 11-point agenda.”

Duterte, the Cusi-led faction’s chairman, has earlier noted that he will not support a presidential candidate until there is a “compelling reason” to do otherwise.

However, Cusi clarified that this decision does not equal to the president’s support to Bongbong Marcos.

(This is not the decision of one person. This is a party decision.)

Duterte slammed Marcos Jr. as “spoiled” and a “weak leader” way back in November 2021, claiming this is the reason why he didn’t desire PDP-Laban to join forces with Lakas-CMD, which is supporting Marcos Jr. and Davao City Mayor Sara Duterte. In December 2021, PDP-Laban backed the presidential daughter’s vice-presidential candidacy.

The origin of the PDP-LABAN’s

Senator Koko Pimentel, who co-leads the other PDP-Laban party with Sen. Manny Pacquiao, said the endorsement demonstrated that the Cusi group is “total strangers” to the party’s beliefs.

Cusi and his colleagues have demonstrated that they are complete strangers to the PDP-Laban, even denying that it was founded to combat the Marcos dictatorship.

“It’s time for Comelec to dismiss these usurpers’ appeal,” Pimentel said, referring to his father, Aquilino “Nene” Pimentel, who created the party with a handful of protesters.

(To all members of the PDP, let us not follow Cusi.)

Cusi, on the other hand, felt that it was time to move on.

“Hindi na natin papatulan pa. We are moving forward. Kapag laging past ang iniisip and we live by the past, walang mangyayari sa atin. Kailangan umusad tayo,” he said.

(We’re not going to confront anyone. We are moving forward. When we always think about the past and we live by the past, nothing will happen to us. We have to move forward)

Cusi’s group intended to support political candidates that the “original” PDP-Laban did not endorse, hence the infighting began in 2018, just before the senatorial elections. When Duterte ordered Cusi to conduct a conference in Cebu City, the fight between the two factions heated up even more. – WhatALife!