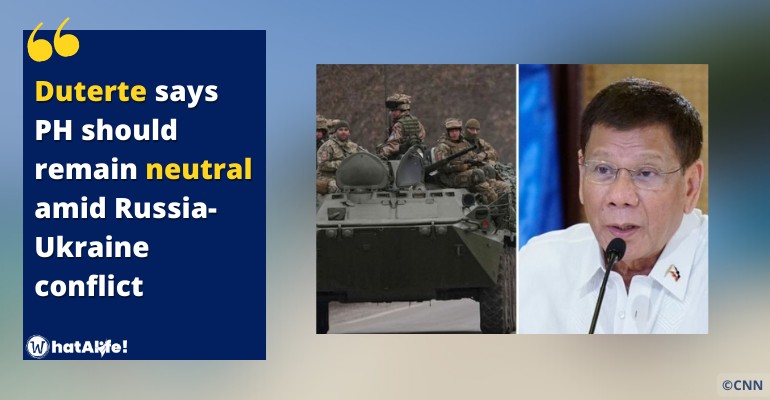 MANILA, PHILIPPINES — According to President Rodrigo Roa Duterte on Thursday, the Philippines should remain impartial in the continuing conflict between Russia and Ukraine.

Duterte remarked in a speech in Palo, Leyte that the country shouldn’t have taken sides in the conflict, and that the Philippines must not be “dragged” into it.

(In other parts of the world, there are killings in Europe, Russia. So, we better just maintain our neutrality. Let us avoid so that we will not be dragged into it.)

“Hindi natin away iyan, huwag tayong makialam (That’s not our fight. Let’s not interfere),” he added.

On the other hand, Duterte expressed concern about the global implications of the conflict between Russia and Ukraine, particularly if it worsens and develops into a nuclear war.

“If it goes nuclear, that’s the end of the world. Tapos na talaga lahat (It’s really the end of everything),” Duterte said.

The International Court of Justice (ICJ), the UN’s top court for international disputes, has urged Russia to stop military measures in Ukraine immediately, expressing “deep concern” over Moscow’s use of force.

Duterte claimed that Russian President Vladimir Putin’s present state is “hurting” him since he considers Putin to be a “friend.”

Duterte, who has consistently claimed to be a friend of Russian President Vladimir Putin, has maintained his neutral stance.

Malacañang previously claimed that it supports the rest of the world in praying for an “early and peaceful” settlement to the crisis in Ukraine, especially because the globe is still recovering from the Covid-19 pandemic. – WhatALife!