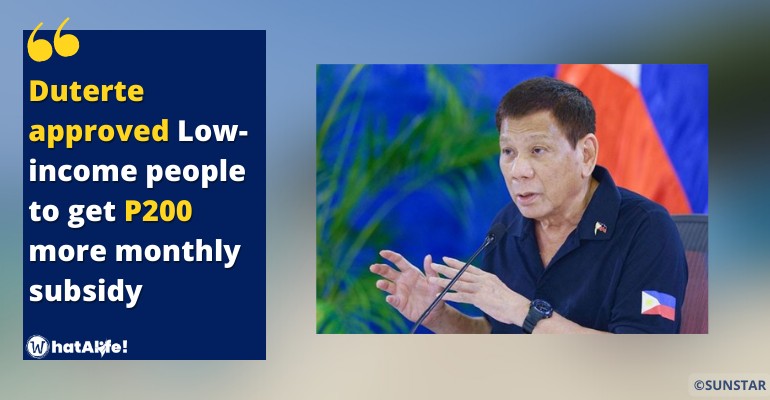 MANILA, PHILIPPINES — President Rodrigo Duterte has authorized a proposal from the Department of Finance (DOF) to grant a monthly subsidy of P200 per household for poor families in exchange for suspending excise tax amid soaring fuel prices.

On Tuesday night, President Rodrigo Duterte said in a conference with representatives of his Cabinet and other authorities that instead of trying to push for the suspension of the excise and value-added taxes on fuel to alleviate the effects of increasing petroleum prices, the government will simply release that much subsidies and other forms of financial aid to vulnerable sectors.

Andanar stated in a radio interview that the new aid, worth PHP33 billion, will assist 4.2 million homes with a total population of 12 million people.

The 4Ps conditional cash transfer consists of a PHP750 health and nutrition support, as well as academic incentives of PHP700 for senior high school, PHP500 for junior high school, PHP300 for elementary school, and a PHP600 rice subsidy for up to three children per home.

Meanwhile, according to Andanar, the Department of Finance and the Economic Clusters have agreed to allocate the tax proceeds from the VAT rise and excise tax to individuals in the bottom half of the income distribution.

Amid rising oil and petroleum product rates, President Rodrigo Roa Duterte confirmed the preservation of the fuel excise tax on Wednesday under the Tax Reform for Acceleration and Inclusion (TRAIN) Law.

Excise tax revenues are best used for subsidies and other alleviation initiatives to minimize the effect of rising gasoline and basic commodity costs. – WhatALife!