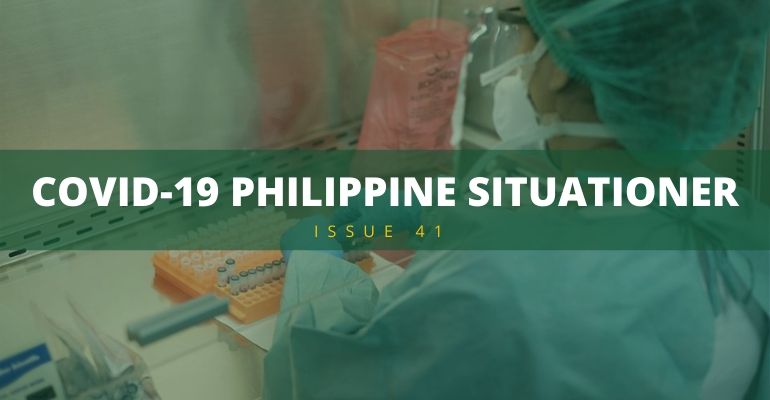 The Department of Health (DOH) reported 555 additional cases for coronavirus disease (COVID-19) on Sunday, June 7. This brings the total number of confirmed cases in the country to 21,895. 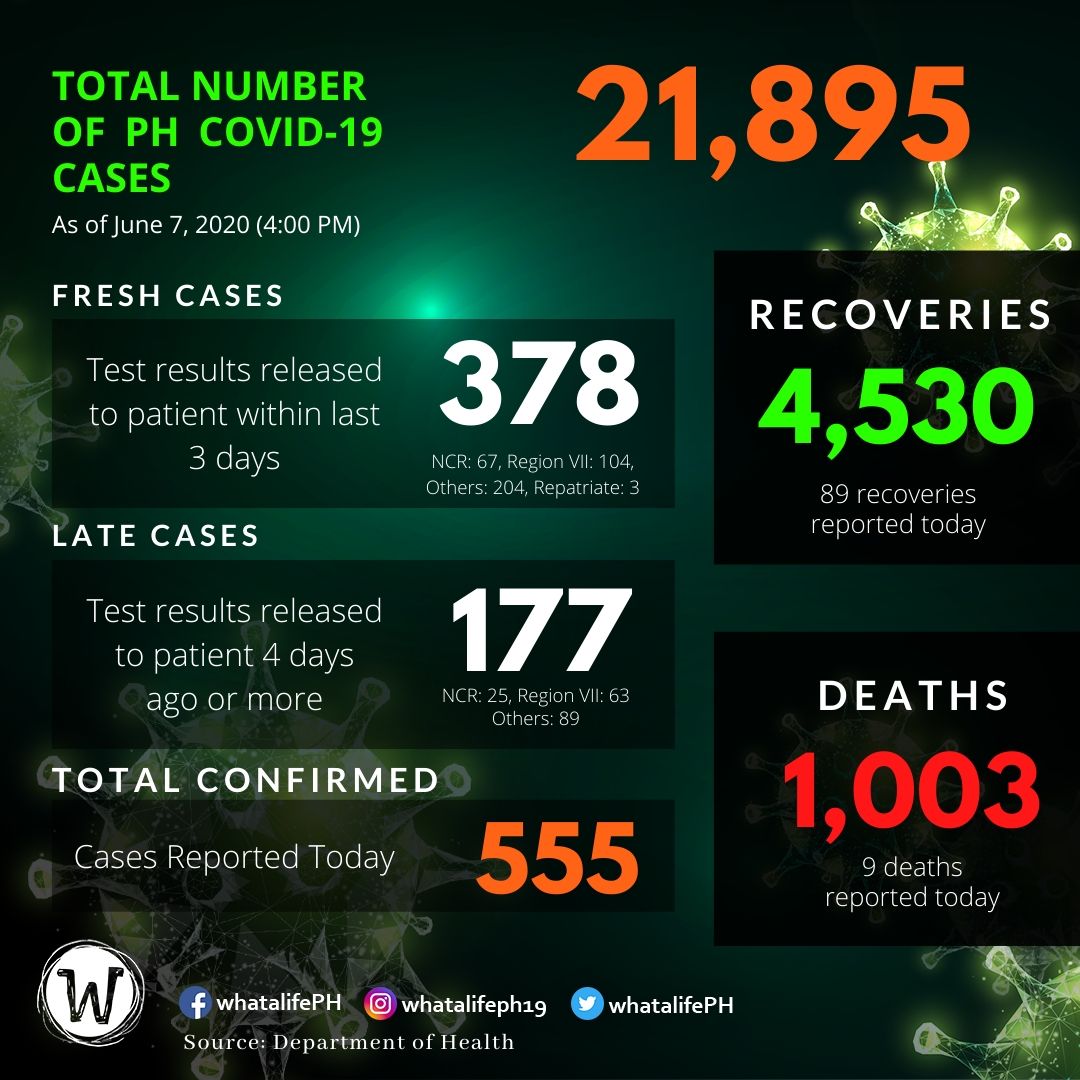 With the country reaching an output of 10,000 tests per day, DOH has announced its plan to expand testing to include certain asymptomatic subgroups. In order to efficiently maximize the limited supply, criteria will be set for identifying which groups of the asymptomatic population should be tested.

Meanwhile, a total of 2,734 (13% of all cases) healthcare workers have been affected by COVID-19, with 1,504 recoveries and 32 deaths. Most of the affected staff are nurses, physicians, nursing assistants, medical technologists, radiologic technologists, as well as non-medical staff.

The health department emphasized that while testing is a vital part of the country’s overall strategy against the pandemic, the ideal approach to combat the threat of COVID-19 remains to be 1) prevention through increasing resilience, 2) targeted testing expansion, 3) contact tracing, 4) isolation, and 5) treatment and management.

The positivity rate in the country (percentage of the population that has been tested who turns out positive for COVID-19) is at 7.2%. That’s below the 10% benchmark of the World Health Organization (WHO). Accordingly, this is a good indicator that the country is sufficiently testing.

The National Capital Region (NCR) has the highest number of confirmed cases in the country, with a total of 11,914 (56%) cases. Nevertheless, the proportion of the cases in the region decreased from 72 percent since January (start of case detection) to April 19, 2020, to 49 percent for the period of April 20 to June 6. 2020.

Meanwhile, cases in Region 7 increased in proportion from two percent to 20 percent for a similar period. On May 4, 2020, the region recorded 123 (38%) from various barangay in Cebu City out of the 321 confirmed cases nationwide (by date of onset). Region 7 recorded a total of 3,273 (15%) confirmed cases, the second-highest in the country.

Region 4-A has third-highest cases with a total of 1,802 (8%) confirmed cases as of Saturday, June 6. Since the beginning of case detection, the case proportion of the region decreased from 15 percent to five percent for the period of April 20 to June 6.

There are a total of 41 licensed RT-PCR laboratories, as well as 13 licensed Genexpert laboratories in the country.. DOH has reviewed and inspected more medical facilities for COVID-19 nationwide, processing a total of 141 laboratory applications as of June 6.

The United States continues to lead the most affected country, with around 1.94 million. Brazil as the second-highest with 673,000 cases, followed by Russia around 467,000 total number of cases.

In Southeast Asian countries, Singapore continues to be the most-affected country with nearly 38,000 confirmed cases, followed by Indonesia with more than 31,000 and the Philippines.

To minimize the risk of being exposed to the disease, the DOH continues to urge the public to avoid going outside unless absolutely necessary. Moreover, the department reminds the public to continue the proper use of PPEs, physical distancing, and good personal hygiene should they need to go outside.

In case you experience any of the following severe symptoms, immediately contact your corresponding Barangay Health Emergency Response Team (BHERT). They will refer you to the appropriate facility close to your residence. Click here for BHERTS CDO contact information.