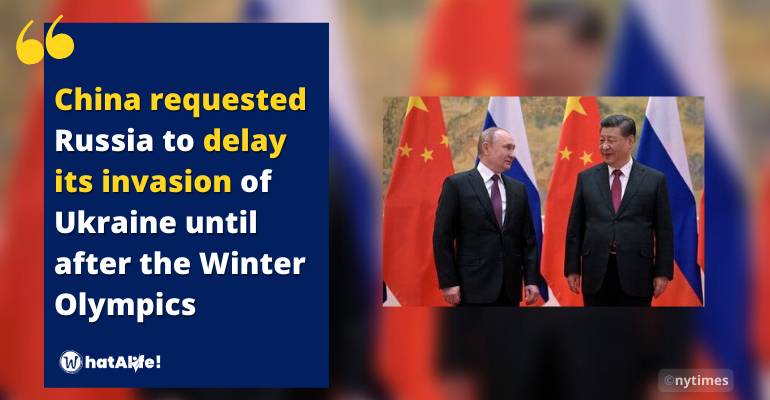 China requested that Russia delay its invasion to Ukraine until after the Winter Olympics in Beijing, US authorities stated.

According to senior Biden administration officials and a European official, senior Chinese officials made the request to their Russian counterparts in early February.

The report stated that the senior Chinese officials knew something about Russia’s war plans or intentions before the invasion began last week.

At the time, Moscow and Beijing published a 5,000-word statement declaring that their alliance had “no limits,” criticizing NATO enlargement, and promising to construct a new world order based on true “democracy.”

The information gathered at the meeting between Chinese and Russian officials was classified. It was gathered by a Western intelligence service and officials found it trustworthy. It was handed around by senior officials in the US and other governments as they discussed when Mr. Putin may invade Ukraine.

Other intelligence officials who were informed on the situation declined to elaborate. Because of the sensitivity of the intelligence, the officials spoke about the report on the condition of anonymity.

According to Bonny Lin, a China researcher at the Center for Strategic and International Studies, it’s unclear how much Xi knew about Putin’s plans.

She pointed out that China had been too late in evacuating Ukrainian residents, indicating that it was not completely prepared.

“Given the evidence we have so far, I think we can’t rule out either possibility definitely – that Xi didn’t know (which is bad) and that Xi may have known (which is also bad),” Lin said.