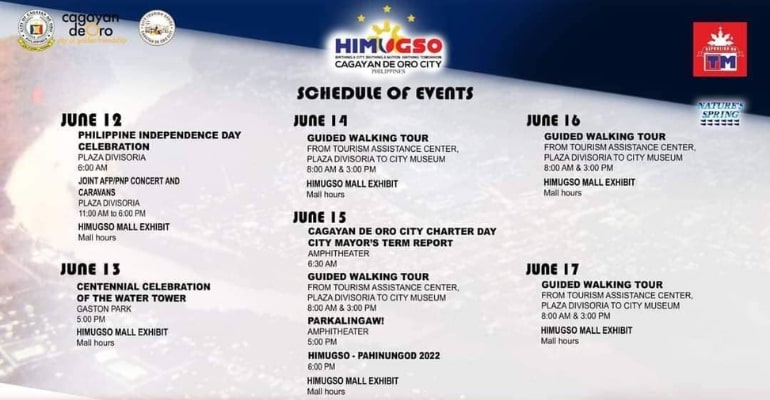 Republic Act No. 7670 declares every June 15 of the year as a special non-working public holiday in CDO.

The event is known as Cagayan de Oro City Charter Day, commemorating the day the city was created into a city on June 15, 1950 by virtue of Republic Act No. 521.

The Act was first passed by the House of Representatives on March 26, 1993, then by the Senate on October 8, 1993. It later passed into law on January 10, 1994, without the signature of the then president Fidel V. Ramos.

The Local Government Unit of CDO will be celebrating the city’s 72nd Charter Day with different activities scheduled as part of HIMUGSO 2022 – a joint celebration of the 124th Philippine Independence Day and 72nd CDO Charter Day.

On June 15, the celebration will start at 6:30 am at the Amphitheater at the historic Plaza Divisoria. Current City Mayor Oscar Moreno will also be presenting his term report, his final one, during the event before stepping down as mayor on the last day of June.

A Guided Walking Tour will take place at 8:00 am and 3:00 pm. The tour will start from the Tourism Assistance Center, Plaza Divisoria, to the City Museum.

‘Parkalingaw,’ a live entertainment show, is also scheduled at 5:00 pm at the Amphitheater.

From June 12 to June 17, the public may visit Himugso Mall Exhibits in different malls in the city.

Himugso 2022 is also the first face-to-face event celebrating the Charter Day since the pandemic. The public is urged to follow minimum public health standards when joining the celebrations.

For more information about CDO’s Charter Day on June 15, check out the post below: