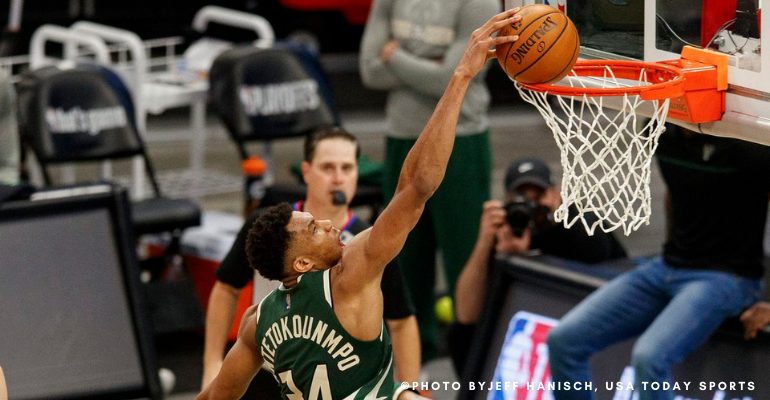 The Milwaukee Bucks buried Miami Heat in Game 2 of Bucks vs Heat on Tuesday, May 25, at Fiserv Forum.

Milwaukee only needed three minutes to build a double-digit lead that it never lost during the game. Because of their franchise playoff record of 22-for-53 3-pointers, the Bucks annihilated Miami 132-98 and taking over a 2-0 series lead.

Amazing play from Forbes and Antetokounmpo

Sharpshooting guard Bryn Forbes led the way from a distance. He drained 5 of 6 from beyond the arc in the first quarter alone and finished the game with a career-high 22 points on 6-for-9 shooting from 3.

According to fellow teammate Jrue Holiday, “If my man got the hot hand, I’m going to him. And he wasn’t missing, so at that point, we were running everything to him just to — really just to see what happens.”

While Forbes led from the outside, it was Giannis Antetokounmpo who controlled the inside in the Bucks vs Heat game.

Antetokounmpo threw down 6 dunks in his 12-for-23 night from the field. He posted 31 points, 13 rebounds, 6 assists, and 3 steals in just 31 minutes. The power forward even delighted the home crowd in the third quarter with a soccer exhibition during a stoppage in play.

Defense played a huge role in their success

The opening of the game set the tone for the match with a 19-4 run that knocked Miami flat on their backs. The Heat never even got within 25 points in the second half. And both Forbes and Antetokounmpo emphasized that Milwaukee’s offensive burst was due to their defense.

In the first two games of the series, the Bucks have posted a low defensive rating of 100.4. But those defensive stops fueled the Bucks, resulting in open shots against a backpedaling Heat defense.

“Defense had something to do with it. We were getting big stops and pushing it in transition and just finding shots,” said Forbes.

Watch the Bucks vs Heat game highlights below.