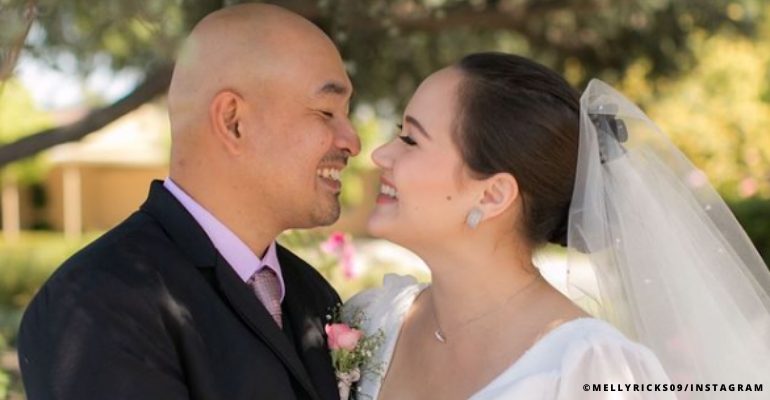 Melissa Ricks tied the knot with her non-showbiz boyfriend, Michael Macatangay, in an intimate ceremony in the US on Tuesday, May 25 (PHT).

In an Instagram post, Ricks said that their wedding was made special by their closest friends and relatives based in California. She also shared the itinerary of her special day.

“I woke up early, hubby cooked breakfast, we went to the grocery to get some snacks and soda for the guests, went through the drive thru at jack in the box to get churros and tacos, then proceeded home to get ready,” she said in a caption. “I did my own hair and makeup, zipped myself into my gown, drove down to the chapel, had a simple ceremony with 15 people.”

“Afterwards we had the reception in my step dads backyard? couldnt get any simpler than that?”

Ricks also shared some clips and photos during the wedding via IG stories, including a selfie of her and Macatangay wearing their wedding rings and doing the traditional prosperity dance alongside their guests.

In 2004, Ricks joined the reality talent search of ABS-CBN, Star Circle Quest, and was one of the top 10 Questors or Magic Circle of 10. After a few weeks of training and entering the final 5 or Magic Circle of 5, Ricks finished the competition as the 4th runner up.

Ricks had been proudly living her life as a single mother until she met Macatangay in 2019. A year later, she got engaged during an intimate gathering in Batangas.