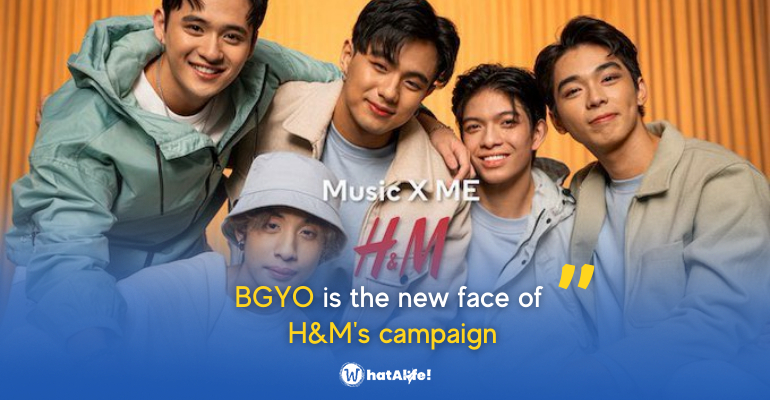 H&M is launching a new campaign in 2022 that combines music and fashion. With the introduction of Music x Me, the Swedish fashion company is putting a new light on up-and-coming Filipino musicians.

H&M Philippines has announced BGYO members Gelo, Akira, JL, Nate, and Mikki as endorsers for its “Music x Me” campaign, which aims to feature Filipino musicians in its events and in-store playlist.

With their music and style, BGYO is ready to take over H&M Philippines. The P-pop group is the first Filipino group to be featured in the “Music x ME” campaign, which seeks to promote local musicians. Watch the boys of BGYO sing and dance while displaying their H&M style in the promo video below:

More Filipino artists will be featured on the brand’s live events in the future. Furthermore, Original Pilipino Music (OPM) will be heard more in-store and even as soundtracks for their collections.

“This time, the launch of Music x Me delves not only into the music and artists themselves but also into the stories of the inspiration behind them in order to inspire aspiring new artists to discover and do the same,” H&M explained. “The brand is leveraging this platform to showcase an exciting array of artists, with the first one being none other than P-pop group BGYO.”

“Every sound is a representation of who we are. Every motion is moulded through years of hard work and discipline. The mistakes in between only make us better. And we take every step with no hesitation,” BGYO’s Gelo, Mikki, JL, and Akira said.

“Let good music inspire you to find your personal style while discovering new sounds. From their journey as a group—through ups and downs, as trainees to stars, we recognize their unique talent and style. They put P-Pop to a new level,” the H&M continued.

ACEs, the official BGYO fandom name are quick to support the P-pop group, which resulted in #BGYOforHM going trending worldwide. Yesterday was also a double celebration as BGYO is the first P-pop group to have their very own Twitter topic!

“Congratulations, BGYO and ACEs. We never doubted this Fandom to take BGYO where they are now. The hard work and perseverance is rewarded. Kudos!” said one fan on Twitter.

Congratulations, BGYO and ACEs. We never doubted this Fandom to take BGYO where they are now. The hard work and perseverance is rewarded. Kudos! ???#BGYOforHM#BGYO @bgyo_ph

Many also shared their trip to H&M to see the official BGYO huge window displays and other visuals in-store. Some even made sure to buy H&M products.

Did some treasure hunting in the store. Hahaha. Thank you @hmphilippines!! ❤️?

BGYO mommies also made their way to an H&M branch, taking a picture in front of their talented boys.