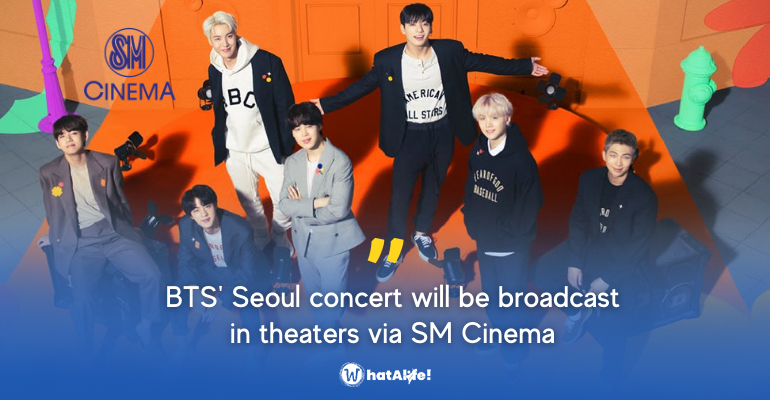 MANILA, PHILIPPINES — SM Cinemas announced on February 17 that the forthcoming BTS concert would be broadcast live only at their cinemas.

Prepare to scream your hearts out, ARMY, as BTS’ upcoming concert will be broadcast live on the big screen! While showtimes and theater locations have not yet been announced, SM Cinemas has guaranteed fans that they can bring their ARMY bombs and cheer for RM, Jin, SUGA, J-hope, Jimin, V, and Jungkook for a full concert experience.

BTS announced on Wednesday that the much-anticipated second leg of their tour would take place at Jamsil Olympic Stadium in Seoul on March 10, 12, and 13.

SM Cinema then announced on Twitter that they would be broadcasting the BTS Permission To Dance On Stage – Seoul Live Viewing concert in their cinemas.

This is the first time the worldwide superstars have performed in front of a live audience in South Korea since their “Love Yourself: Speak Yourself (The Finale)” world tour in 2019. It’ll also be the first time they’ve held a fan-attended event in their own country since the COVID-19 outbreak.

BTS’ “Permission To Dance On Stage” will be available for paid streaming on March 10 and 13. The concert will be streamed via global theater live watching on the 12th.

Big Hit Music told fans that “the firm considers the artists’ health as a top priority”. They continued that “all of their operations would diligently comply with the instructions and rules of the health care authorities.”

Meanwhile, in the Philippines, cinemas are authorized to operate at 50% capacity under Alert Level 2 according to the Inter-Agency Task Force’s rules. In enclosed cinemas, however, only fully vaccinated individuals are permitted. In addition, moviegoers must sit one seat apart and wear a face mask at all times. – WhatALife!