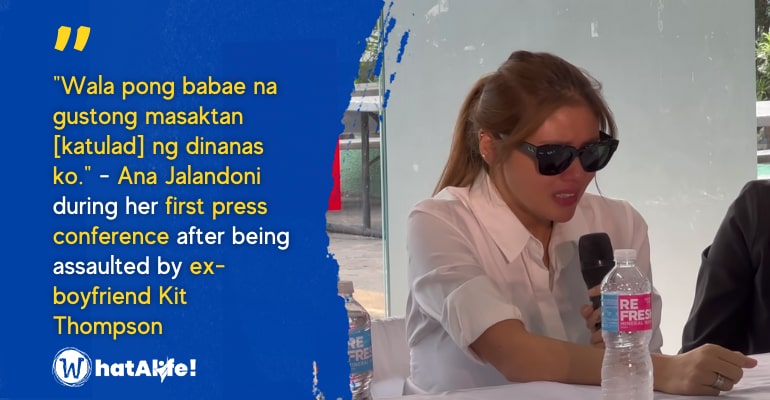 During a live media press conference on March 28, 2022, Ana Jalandoni became emotional in the midst of the actor’s assault case. The ex-couple made headlines when the actor was accused of mauling the actress.

To recall, Ana and Kit had an altercation at a hotel in Tagaytay according to police reports. It was then that Thompson was accused of beating up Jalandoni.

Ana was rescued by the authorities after pleading for help. They rushed to the hotel and brought Ana to the hospital while Kit underwent inquest proceedings at Tagaytay City Prosecutors Office.

The Philippine National Police has already filed a case against Thompson for violating Section 5 (a) of Republic Act 9262, also known as the Anti-Violence Against Women and Children Act.

Kit Thompson has been released after posting bail, but Ana has stated that she intends to pursue a case against him.

Ana has finally faced the media for the first time since the March 18 incident. She turned emotional as she remembered the details of what really happened.

“Hindi ko pa kaya ikwento. Nasaktan po ako,” she said through tears upon facing the media together with her father, sister and lawyer.

(I can’t tell you in [detail] but I’ll just say how I feel. What I went through was painful because I didn’t see it, I didn’t expect what my beloved did to me. No woman wants to be hurt [like] what I experienced.)

(I’ve been through a lot in life, all of them [I passed]. But what happened to him, I don’t know if I can handle it. I’m having a hard time; my mind and my heart cannot process everything because I was really hurt.)

During the press conference, Ana’s camp showed the wounds and bruises that the actress allegedly sustained from the injury of the young actor Kit. Apart from the first images of Ana’s face, she also suffered bruises on her thigh and, according to her lawyer, “Indications of strangulations” on Ana’s neck.

(We need medical attention that is not temporary.)

Prior to the incident, according to Ana, she and Kit had talked about marriage. They talked for a long time about her ex. That’s when Kit started to threaten her not to leave him. Ana assured him that she loves him very much and she will never leave him.

After their conversation, Ana went out of their room to look for a signal because she wanted to tell a friend about their vacation. But since both of them had been drinking, Ana allegedly fell asleep outside. When her boyfriend saw her, the actor allegedly took her back to their hotel room. This is where Kit’s anger started and ended up hurting her.

(He thought I left him. When he laid me on the bed, he slapped me. I was shocked.)

(In my perception, he thought I would leave him like what I did to my ex.)

Ana strongly clarified that there is no third party in her relationship with Kit.

She also admitted that she got married in 2017 in America, but after a few months they broke up with her ex-boyfriend.

So far, Kit has not been in contact with her again. Kit’s mother once asked how she is coping up after the incident through a messaging app.

Despite the incident, Ana admitted that she still loves him and that it’s not easy to let go of everything.

However, Ana and her family are determined to pursue the complaint against the actor.

When asked what Ana’s message would be for Kit, her short answer was, “Fix yourself.”

Ana wishes nothing but for everything to be okay. – WhatALife! / Hannah