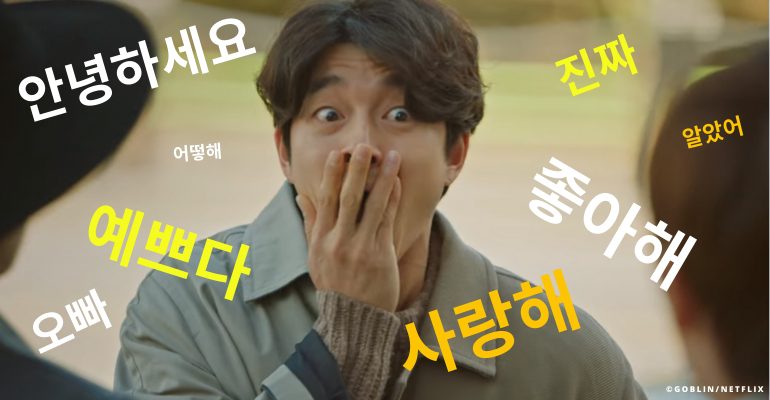 If you’re a K-drama fan, then I’m sure you’re pretty interested in learning the Korean language. So, today, we will be discussing some of the most commonly used words, phrases, and expressions in your favorite Korean dramas.

This is the most common way to greet someone in Korean. It simply means “Hello!” I bet you’re not yet a full-fledged K-drama fan yet if you’re not familiar with this word. The casual way of saying this would be “annyeong,” which you can also use when saying goodbye.

Respectively, these are how you say “dad” and “mom” in Korean. Take note that these are the informal ways of talking to your father and mother. The standard and more formal Korean ways to address your dad and mom are “abeoji,” which means “father,” and “eomeoni,” which means “mother.”

Now, in Korea, they address their grandfather as “harabeoji” and their grandmother as “halmeoni.” You can also use these terms to address older men and older women, respectively.

In conversation, if you want to refer to a younger sibling, you can call them “dongsaeng,” no matter their gender.

This word means “friend” in Korea.

Now, when you are in school or your workplace, you should address or refer to your seniors as “sunbae.” When addressing or referring to your juniors, you can use the term “hoobae.”

Now, when answering a phone call, you don’t say “annyeonghaseyo” or “annyeong” to greet the other person on the other line. You say “yeoboseyo” instead, especially if you do not know whom you are talking to.

Of course, we shouldn’t forget this phrase. I think every K-drama fan knows this one. “Saranghae” or its formal and more polite version, “saranghaeyo” is a phrase that means “I love you.”

So, you miss someone, and you want to tell that person. Then, “bogo sipeo,” which translates to “I miss you” or “I want to see you,” would be the perfect word to say it. You can also say “bogo sipeoyo,” which is its more polite version.

Do you have a crush? Or do you want to tell someone that they are pretty? If so, then you should say “yeppeuda,” which means “you’re pretty” or “you look pretty.” To sound more polite, you can say “yeppeuyo” instead.

The words “juseyo” and “jebal” are similar in meaning – they both translate to “please.” However, take note that you should use them depending on the level of relationship you have with the person you are talking to and the kind of request you ask of them. For instance, if you are ordering something at a restaurant, you should use the former. You only use the latter version if you are begging or desperate for something.

In Korea, you use the word “gamsahamnida” or “kamsahamnida” to say “thank you.” However, when you are close to the person already, you may say its less formal version “gomawo” or “gomawoyo.”

If you have committed some mistake, you should apologize for it and promise you will do better. In Korea, to express that they are sorry formally and politely, they either say “joesonghaeyo” or “jeosonghamnida.”

The word “mianhae” is the less formal way of saying “I’m sorry” in Korean. To sound polite, you can say “mianhaeyo.”

The word “wae” in Korean means and is used in the same way as the word “why” in English.

Similarly, the word “mwo” in Korean means “what” in English. You can hear this word a lot when you watch K-dramas.

The word “omo” is a common expression in Korea used when they are surprised, excited, or any other emotion involving happiness.In a way, it is the Korean way of saying, “Oh my gosh.”

If you want to get someone’s attention or, in general, want to butt into a conversation, you can say “jeogiyo,” which means “excuse me.”

In Korea, the word “jinjja” means “really” or “seriously.” You can use this when you are talking to a close friend or someone close to your age. You can use its formal version, “jinjjayo,” when talking to an older person or stranger. Moreover, you can use the term as a question or an expression of disbelief.

If you are reading this article, I bet you are already quite familiar with this Korean expression. The word “aigoo” is another Korean expression that means “oh my gosh” or “oh dear.” You can use this expression when you are surprised, shocked, confused, or disappointed. You can also use this when you want to express pity or frustration and pair it with a deep sigh for more effect.

“You scared me!” or “You surprised me!” These are what the Korean term “kamjagiya” means. You use this when you want to express shock or surprise in response to anything unexpected.

We can’t talk about famous Korean words and phrases without including “daebak” in our list! Depending on the user’s tone, “daebak” is a common Korean slang used to express surprise, astonishment, or sarcasm. It can mean “wow,” “jackpot,” “great,” or “cool.” You can also use the word “daebak” to express awe or happiness.

In Korean, you can use the term “gurae” if you want to agree on something. It means “sure,” “alright,” or “okay.”

Similarly, you use the word “andwae” to say “no way.” It is a term used if you want to defy or disagree on something. Aside from that, you can also use it to express disbelief or shock.

One other popular Korean expression you commonly hear in K-dramas is “gwaenchanha.” It is the Korean way of saying “I’m okay” or “I’m fine.” Much like the other expressions, you can also use this term in a question form to ask if someone is okay. To be more polite, you can say “gwaenchanhayo” instead.

You may have noticed that when a character in a K-drama is panicking or stuck in a situation where they have to figure out what to do, they say “eotteokhae”? That is because “eotteokhae” is an expression that means “what should I do?” You can also use it in the same way as you say “oh no” or “no way” in English. Again, to be more polite, they use “yo” and say “eotteokhaeyo” instead.

Another word that we commonly hear in K-dramas is “arasseo.” It means “got it” or “understood.” You can also use this as a question if you want to ask someone if they understood what you said.

If you need a moment or you want someone to wait for you for a bit, then you can say “jamkkanman.” Depending on the situation, You can also use it in a similar way when we say “excuse me” to get someone’s attention.

Then, when you want someone to stay, you say “gajima.” It means “don’t go” in Korean.

Now, if you are a K-drama fan, then you may already know what this word means. In Korea, “joahae” means “I like you.” Next to “saranghae,” it is one of the most anticipated words that fans cannot wait to hear from their leading “oppa” or “unnie.” You can say “joahaeyo” if you are addressing someone older to sound polite.

Another Korean slang that you may have heard on K-drama is the word “kol.” This particular Korean term came from the English word “call.” Thus, “kol” means “deal” and is used when you agree to a bet or a challenge.

If you are shocked or angry about someone’s words or actions, you can say “micheosseo.” This Korean expression translates to “are you crazy?” in English. Of course, saying such to anyone would be very informal and impolite, but what can you do if you’re angry, shocked, or concerned, right?

You’ve finally reached the last word, which is more of a curse word that you would usually hear from thugs and gangsters in K-dramas. The term “jugeullae” translates to “do you want to die?” which you can use when you are angry at someone and want to make a threat. Nevertheless, close friends also use the term as a light-hearted joke among them. So, if a friend is planning on doing something crazy, you can say, “Micheosseo? Jugeullae?”

Have we missed any other words, phrases, or expressions from the Korean language commonly used in K-dramas? Let us know in the comments section below!

Also Check Out: 30 Korean drama actors then VS now