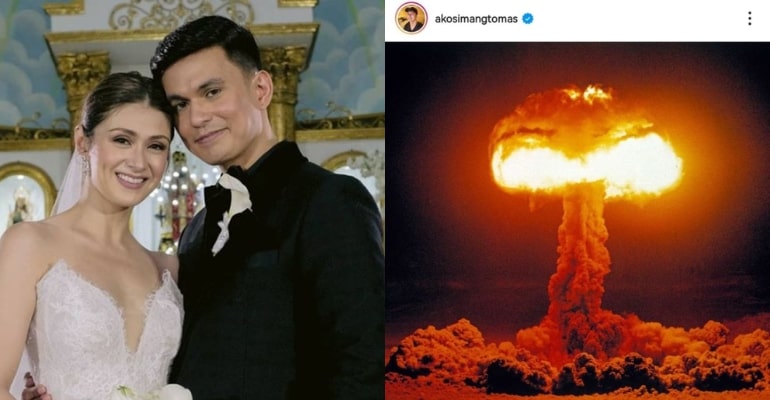 MANILA, PHILIPPINES — After a series of cryptic posts, comments and Instagram stories that were deleted, Tom Rodriguez claims to be on ‘gag orders’ when asked to share the truth about his annulment rumours with wife Carla Abellana.

In a now-deleted post on Instagram, Rodriguez shared a photo of an explosion. Fans, however, were quick to take a screenshot of the post and re-upload it on social media.

The caption tells of “things” going “south,” how “no one is listening now”, and “history repeats.”

“Things go south, mushroom clouds. No one’s left around. Money bought, power talked, but no one’s listening now. And empires claimed, up in flames, burnt to the ground. History repeats, video reels going round and round,” Rodriguez posted.

Rodriguez also replied to a few comments on his post. One commenter asked him to tell the truth. However, he replied, “Gag order, Ask THEM why.”

Another commenter also asked the actor to fight for Carla Abellana, claiming that she still loves him.

The actor debunked the claim by saying, “Not true. And you all know a tiny fraction of an entire story. But one day the whole TRUTH will prevail!”

Rodriguez also posted on his Instagram stories of a man silenced with tapes on his mouth. The post was also taken down.

After their marriage in October 2021, netizens noticed that the actor had unfollowed and followed his wife in January 2022, sparking rumours. However, in February 2022, Rodriguez tried to mediate the situation by declaring his love for his wife on an Instagram post.

But rumours continued to circulate when netizens found Abellana had liked a “cheater” comment on social media.

In March 2022, the actress decided to sell her luxe condo unit below the market price. Following her decision, her father, PJ Abellana, went to Cristy Fermin for an interview and admitted that the pair were having marital issues and that Rodriguez had a one night stand. This statement has been retracted, with PJ Abellana saying that nothing happened.

One week later, Rodriguez went on a hiatus on social media that lasted for over two months. The now-deleted posts were his first activity after reactivating his Instagram.

On May 26, Cristy Fermin posted a Youtube Vlog on how Carla Abellana is preparing the papers for her annulment with Rodriguez. – WhatALife!