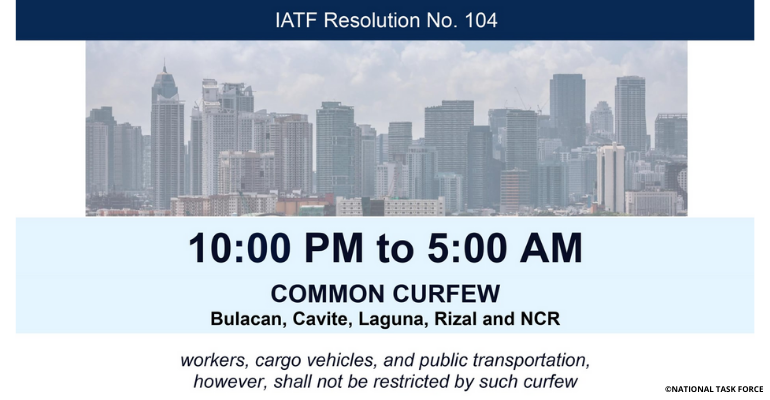 Due to the alarming surge of COVID-19 cases, Malacañang announced the reimposing of GCQ on Sunday, March 21.

The government is reimposing movement restrictions in certain economic and establishment activities in Metro Manila and other general community quarantine areas starting March 22 to April 4, 2021.

Roque dismissed as “fake news” that there would be a hard lockdown in Metro Manila and neighboring provinces.

Under IATF Resolution No. 104, he said only essential travel into and out of Metro Manila, Bulacan, Cavite, Laguna, Rizal will be allowed.

Roque described this as a “travel bubble” where residents will only be allowed to travel within their respective provinces.

Travel of authorized persons outside their residences (APORs) such as essential workers, health and emergency frontline services personnel; government officials and government frontline personnel; duly-authorized humanitarian assistance actors; persons traveling for medical or humanitarian reasons; persons going to the airport for travel abroad, returning overseas Filipinos and overseas Filipino workers (OFWs) will be unimpeded for as long as they show their respective work identification cards.

Individuals crossing zones for work or business and going back home will also be allowed to travel to and from the said areas.

“Kung kayo ay uuwi, essential travel po ‘yun. Kailangan lang magpakita ng ID kung saan ka talaga nakatira (If you’re going back home that’s essential travel. All you need to do is show your ID to prove that you live there),” he said.

He expressed hope the public would understand that additional restrictions in the said areas were being done “for the common good.”

Biking and walking, he said, will also be encouraged.

Scheduled flights will not be canceled, however, he said non-essential travel including that for tourism, will be prohibited.

All public gatherings, including religious gatherings, will be prohibited but weddings, baptism, and funerals will be allowed but must observe a 10-person venue capacity.

Current operational capacities of essential and non-essential services and industries will remain.

However, face-to-face meetings, group meals in workplaces will be prohibited. Instead, work-from-home and virtual meetings are encouraged.

Roque said the IATF resolution also enjoins the private sector to adopt similar alternative working arrangements as those in place in the executive branch of government such as operating on a 30 to 50 capacity.

Outdoor dining must observe a maximum of 50 percent venue capacity.

Take out and delivery is encouraged, he added.

Although the economy will stay open, Roque said the IATF resolution will require persons below 18-years-old and above 65-years-old, those with comorbidities, and pregnant women to remain inside their residences at all times.

The IATF resolution also advises wearing a face mask at home, especially when living with the elderly and vulnerable.

Moreover, accepting visitors outside the immediate family or household is strongly discouraged.