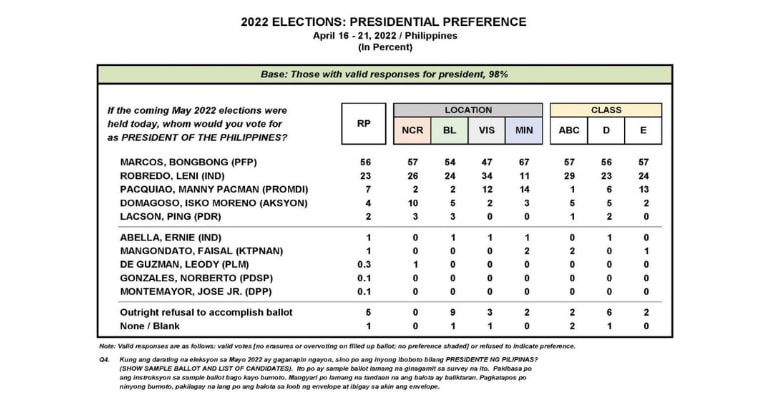 According to the most recent Pulse Asia preference survey, former senator Ferdinand “Bongbong” Marcos Jr. stayed on top among presidential contenders, a week before the May 2022 national and local elections.

Marcos’ rating remained unchanged at 56 percent from the March 17 to 21, 2022 survey, according to the data released on Monday.

Meanwhile, according to the Pulse Asia survey issued on Monday, Vice President Leni Robredo is still in second place, despite losing one percentage point from last March to this April.

On the other hand, there were significant changes below Marcos and Robredo: Manila Mayor Isko Moreno is no longer in third place since Senator Manny Pacquiao’s numbers increased.

Senator Manny Pacquiao has displaced Manila Mayor Isko Moreno from third position. Pacquiao’s rating improved to 7% from 6% in the March poll, while Moreno’s decreased from 8% to 4%.

Face-to-face interviews were conducted among 2,400 respondents in the current Pulse Asia Survey, who were all registered voters aged 18 and up.

The participants were asked: “If the coming May 2022 elections were held today, whom would you vote for as president of the Philippines?” according to Pulse Asia.

Additionally, broadcast journalist Raffy Tulfo and Antique Representative Loren Legarda were the most popular senatorial candidates in the survey. – WhatALife!