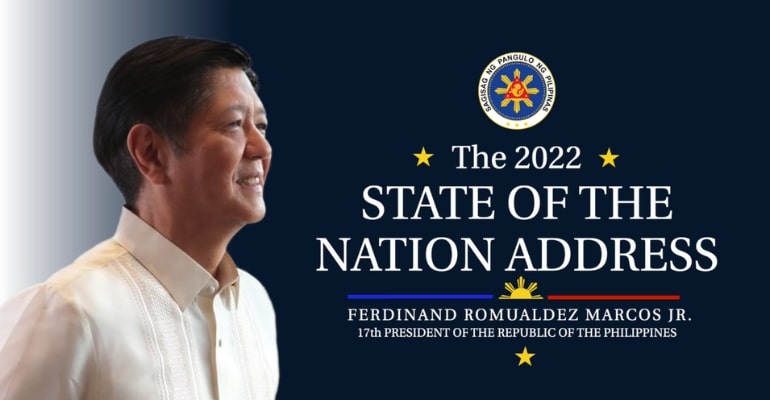 MANILA, PHILIPPINES — President Ferdinand Marcos Jr will give his first State of the Nation Address (SONA) as the president of the Philippines on Monday, July 25, 2022, at the Batasang Pambansa.

A week ago, Marcos invited everyone to listen to his first SONA.

“Samahan niyo po ako at pakinggan ang estado ng ating bansa at ang mga plano at mithiin natin bilang isang sambayanan para sa mga susunod na taon (Join me and listen as I talk about the state of the country and our plans and aspirations as nation in the coming years),” he said in a Facebook post.

The SONA will take place at the newly renovated Batasang Pambansa Complex in Quezon City in a joint session of the House of Representatives and the Senate.

On Friday, July 22, Executive Secretary Victor Rodriguez revealed that Marcos personally wrote his speech for the event, saying how Marcos had been working on his speech at the weekend before his maiden SONA.

Rodriguez said they even freed up the President’s schedule from Friday, July 22, to give him ample time to work on his speech. He devoted the weekend and Monday morning to finish the piece.

Asked if the President had rehearsed his speech, Rodriguez said he had yet to rehearse it as it was still a “moving draft.”

According to Rodriguez, Marcos’ SONA will be delivered “much like how he delivered his inaugural speech” and is going to be a mix of both English and Filipino.

However, unlike his inaugural speech, Marcos’ SONA message is expected to be more detailed, containing inputs from his Cabinet members.

His public address will focus on the outcome of the Cabinet meetings he presided over in the past weeks, Rodriguez said.

Marcos is also expected to lay out his plans for, at the very least, the first year of his administration, Rodriguez added.

According to House Secretary General Mark Leandro Mendoza on Tuesday, July 18, the president also wanted his first SONA to be simple.

“They have asked us to make it simple so he can prepare the message to the general public,” Mendoza said.

Marcos’ first SONA will be done face-to-face. However, guests are required to present a printed copy of an RT-PCR test administered 48 hours before the event.

More than 1,300 guests have been invited to attend, most of whom have confirmed attendance. This includes Vice President Sara Duterte, former presidents, vice presidents, speakers, Senate presidents, diplomatic corps, justices, and members of the Marcos cabinet.

You may watch SONA live through the official livestream by RTVMalacanang on Youtube. – WhatALife!/Zed