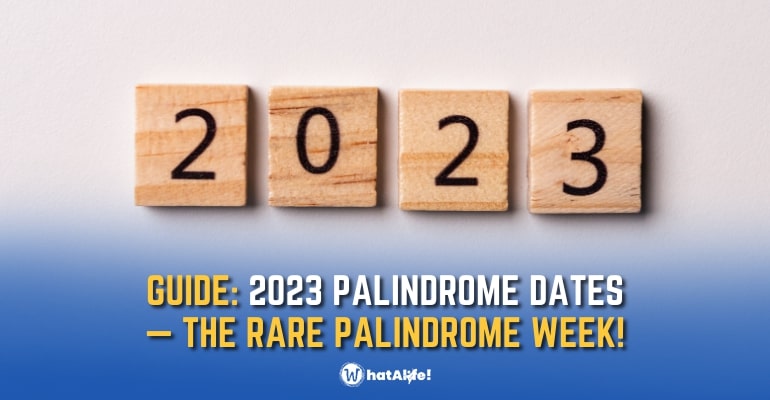 Palindromes are sequences of words, phrases, or numbers that can be read even when reversed. For example, “Was it a car or a cat I saw?” can be mirrored and still spelled out with the exact words and meaning. With that said, here are the 2023 Palindrome dates that might catch your interest!

Most palindrome dates for 2023 are in March since March is the 3rd month of the year. Those dates are:

This series of palindrome dates is called a palindrome week, where the dates are a palindrome for an entire week! The rarity, however, will increase depending on the format.

There are also some exciting dates that have their unique pattern, such as new year’s day, January 1, 2023 or written as 1/1/23. This pattern displays the Fibonacci Sequence, where the arrangement starts with 1+1=2, 1+2=3, and so forth.

What Significance Does A Palindrome Have?

Humans love to see patterns in everything. Like it’s a built-in function for humans to distinguish a different kind of thinking pattern that separates us from other living organisms. Due to this, we can think abstractly and unconventionally, allowing us to change the nature of things.

However, it also means we tend to associate patterns with unrelated things, in short, superstitions. Some cultures see specific numbers as lucky and unlucky. For example, many western cultures perceive the number 3 as fortunate, which is frequently seen in this year’s palindromes.

Some cultures, however, avoid the number 3 in some things. For example, Japanese and Vietnamese cultures generally avoid taking pictures in 3 due to an old superstition believing that the person in the middle of the photo will die soon.

What’s better than a palindrome, you ask? What about a palindrome that can be the same when you write it backward and even when you flip it upside-down? The most recent ambigram palindrome was not that long ago, back on February 22, 2022, written in the European date format, dd/mm/yyyy.