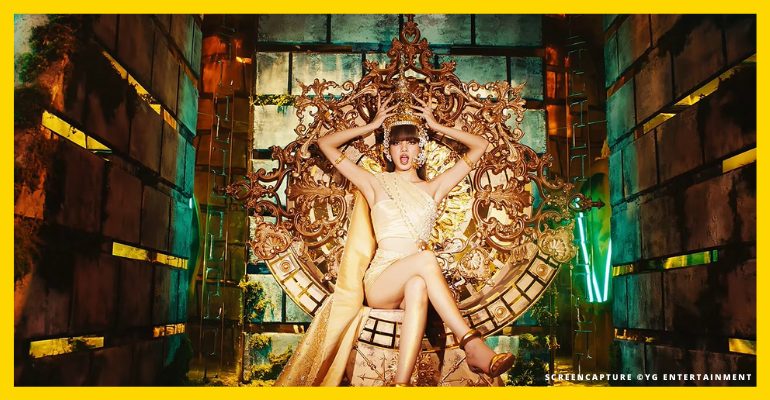 BLACKPINK’s Lisa dropped her Lalisa MV, which is the title track of her debut solo album. The music video was posted at the same time as her album’s release. So, fittingly enough, the album’s name is also Lalisa.

am I supposed to just???? go back to sleep???? after this??? #LISA #lalisa pic.twitter.com/dN7HTkGNkV

What concept will you have on your music video?

The music video depicts several concepts. In one, we see Lisa pole dancing. In another, a police raid where the police uniforms have “POLISA” stamped on them. Then there’s also a desert setpiece complete with dune buggies. Additionally, we see Lisa swinging on a bright tropical cottage set. She even displays her Thai culture with a costume dripping in gold! So Lisa didn’t miss a beat with the visuals — the Lalisa music video is a real feast for the eyes, not just the ears!

The album and the track are both named after Lisa’s legal name Lalisa.

It turns out a fortune-teller may have predicted Lalisa’s popularity!

Fun fact: Lisa changed her legal name to Lalisa because of a fortune-teller!

It’s a cultural thing. People from Thailand change their name to bring them better luck — for health, finances, career, or even for love!

“Opting for a name change in the hope that it might improve future prospects may sound like a drastic step, but it is common practice in Thailand,” says DW. Additionally, Thais sometimes choose to change both first and last names at the same time!

The meaning of ‘Lalisa’ is ‘one who is praised.’ Looking at the #LALISA trending topic on Twitter, the name fits like a glove!

I'm just SO GLAD & PROUD that Lisa got to put some of Thai cultures in her MV of #LALISA
LOOK AT THIS VISUALS !!!! *screaming in thai* pic.twitter.com/Jq3EihwjX6

Born Pranpriya, Lalisa Manoban was born in Thailand. She then started dance classes at the age of four, which explains her strength as a dancer today. She even joined the We Zaa Cool dance crew alongside BamBam of GOT7, who is also a Thai-born Korean Idol! Finally, in 2011 Lisa made history as YG Entertainment’s very first non-ethnically Korean trainee.

Lisa will debut Lalisa on The Tonight Show Starring Jimmy Fallon as well.