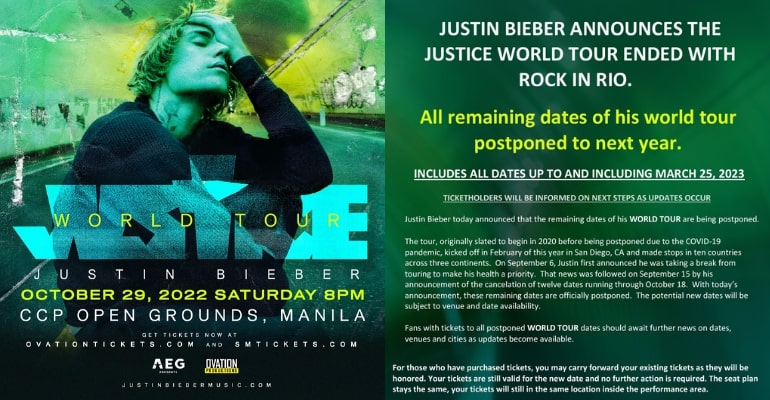 The postponement includes tour dates up to and including March 25, 2023. The statement announced that the Justice World Tour ended with Rock in Rio.

The remaining dates of the world tour are postponed to next year. It also stated that Bieber would make his health the priority. It can be noted that Bieber had been diagnosed with an illness that caused partial facial paralysis.

“On September 6, Justin first announced he was taking a break from touring to make his health a priority. That news was followed on September 15 by his announcement of the cancellation of twelve dates running through October 18. With today’s announcement, these remaining dates are officially postponed. The potential new dates will be subject to venue and date availability. Fans with tickets to all postponed World Tour dates should await further news on dates, venues, and cities as updates become available,” read the statement.

Tickets bought by fans will still be honored for the new tour dates (yet to be announced). In addition, fans are asked to stand by for updates on dates, venues, and cities for the resumption of the tour next year.

Meanwhile, those who will be unavailable on the new dates may ask for a refund from the corresponding ticket sellers.

More refund information will be available on ovation.ph and ovationtickets.com. – WhatALife!