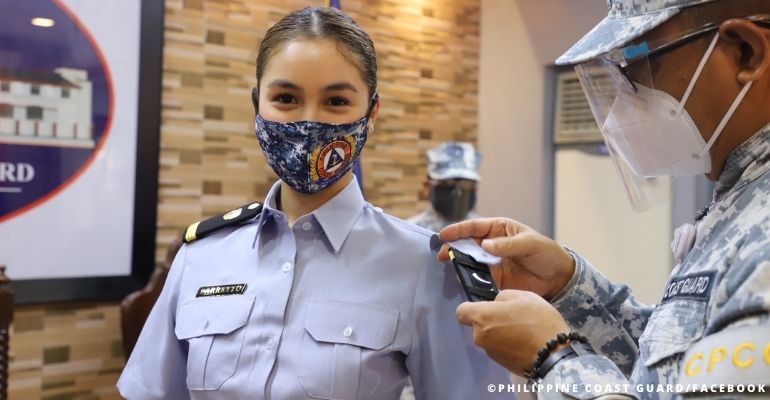 In a Facebook post on Wednesday, the PCG welcomed the actress to its ranks, with Commandant CG Admiral George Ursabia leading the oath-taking ceremonies of Auxiliary Ensign Barretto.

Barretto joined Auxiliarist Ando Cruise Catipay, Auxiliarist Jalil Laidan, and Auxiliarist Harold Jocel Talan, in the ceremony held at the PCG National Headquarters in Port Area, Manila.She pledged to actively support the initiatives of the unit “towards the delivery of humble and compassionate service to the Filipino people.”

The actress’ boyfriend Gerald Anderson, 32, was also present at the event. Anderson is an auxiliary lieutenant commander of the PCGA K9 Squadron. He also welcomed Baretto into the field of public service by sharing photos during the oath-taking ceremony.

Meanwhile,Ursabia thanked the new members of the PCGA who assured commitment to serve the nation by supporting the Coast Guard in the performance of humanitarian missions and disaster response operations.

He also highlighted the increasing need for K9 units in the country for the promotion of national security.

After more than a year of speculation of dating rumours, Anderson admitted in a one-on-one interview with host Boy Abunda last March that he is in a relationship with Barretto.