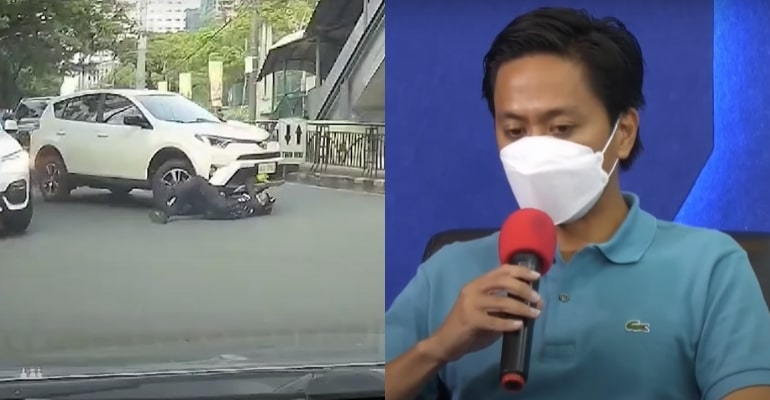 MANILA, PHILIPPINES — Jose Antonio Sanvincente, the driver of the SUV in the viral hit-and-run case of a mall guard, surrenders to the Philippine National Police (PNP) on June 15 in Camp Crame, Quezon City.

After hiding for days since the viral hit-and-run case of a mall security guard in Mandaluyong City, suspect Jose Antonio Sanvicente was accompanied by his parents and lawyer on Wednesday at the PNP headquarters.

PNP officer-in-charge, Lt. Gen. Vicente Danao Jr., presented the group in a press briefing, which you can watch below:

When asked by the media about the events, Sanvicente said that everything is “blurred” in his mind.

“The events that occurred are now blurred in my mind. My mind is in chaos at the time. I cannot think properly now,” he said.

Joel Sanvincente, the father of the suspect and the registered owner of the vehicle, said that several police officers went to their house and allegedly confronted him about the incident.

“I told them that I am not the registered owner. I am Joel Sanvicente and my son is Jose Antonio (Sanvicente),” he said.

His address was included in the car’s registration because he bought the vehicle for his son, who was the driver during the viral incident.

The father called for Macalino, their lawyer, after realizing the trouble his son was in. Macalino appeared at the Mandaluyong City Police and was reported to have asked police assistance to reach out to the victim Floralde and his family.

Meanwhile, Sanvicente’s mother (who refused to be named) said they surrendered after Lt. Gen. Danao issued a warning about a warrant of arrest.

During the Camp Crame flag ceremony on Monday, Danao also asked Jose Sanvicente whether he is a drug addict, noting that “no person in his right sense will do” what he did to the mall guard.

However, the young Sanvincente denied that he is a drug addict.

Macalino said that the parents would not tolerate their son’s actions.

(He didn’t want the accident to happen. He was scared, and he panicked. Anton has to appear in person so that he can reveal what really happened and then extend an apology to the public. This is Anton, and he came here. I told his parents he had to show up and then surrender the SUV he used to drive.)

Macalino then denied the rumors that they offered Floralde’s camp a settlement.

Meanwhile, the Sanvicente family has promised to shoulder all medical expenses of the victim.

Additionally, Danao said that the case is now considered “solved.”

“Well as far as the PNP is concerned, we consider this case solved considering that we already filed the case and the person of interest or suspect voluntarily gave up to clear the matters at hand. So we are now leaving to the prosecutor’s office, to the courts on the proper venue to answer the matters at hand. It is now in their hands and we do not want to further comment because it might prejudice the results of the matter at hand sa court,” the PNP officer-in-charge said.

The suspect faces charges of frustrated murder and violation of Article 275 of the Revised Penal Code, known as the abandonment of persons in danger.

The Sanvicentes also promised to show up at the Mandaluyong City Prosecutor’s office on Friday for the preliminary investigation.

The victim, Floralde, said he would not accept any settlement and wanted to see Sanvicente in court to face his charges.

Floralde, a mall security guard, was directing traffic in Barangay Wack-Wack when the SUV did not stop as directed and instead bumped and ran over him.

The victim underwent treatment for four days in the hospital while the suspect fled the scene.

Watch the viral hit-and-run incident below: