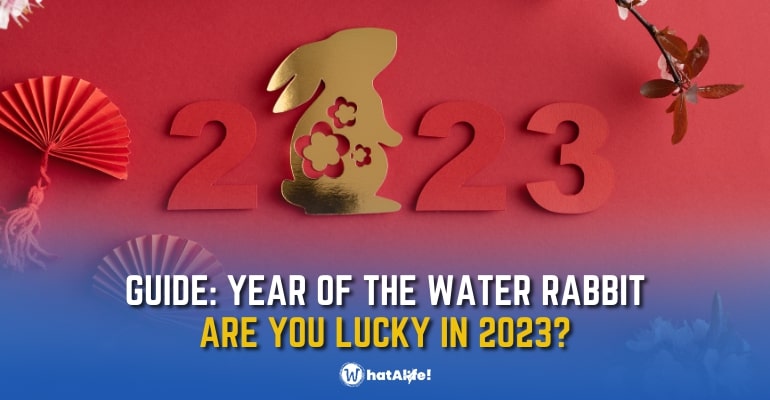 Wondering if you’ll be lucky this year? Check out this blog for the Year of the Rabbit 2023 Predictions!

The new year 2023 is the year of the Water Rabbit. In Chinese culture, the Rabbit represents longevity, peace, and prosperity. In fact, 2023 is predicted to be the year of hope. However, before we delve deeper into the Chinese Zodiac, let us first get to know the story of how it came to be and the attributed traits of each animal.

What does the Year of the Rabbit bring to the table?

Past sacrifices will be handsomely rewarded in the year of the Rabbit. All of our efforts will eventually bear fruit, and the sweetness of that fruit will depend on how pure our intentions were in the first place.

The year of the Rabbit is profitable for those willing to take risks. Thus, risk-takers such as gamblers (not in the casino sense) and stockbrokers might find a little extra “good luck” this year.

Since the Rabbit is also a fertility symbol, this is a decisive year for starting new businesses and for individuals wanting to start families. Artists will also find new inspirations and move in new directions.

The Chinese Zodiac is rooted in the fable of the Great Race. The story starts with the Jade Emperor announcing a Great Race to determine what animal will correspond to the years on the calendar. First, however, the animals must pass a river to reach the goal.

Though there are only 12 animals in the Chinese Zodiac, 13 participated in the Great Race. In no particular order, these animals are the Rabbit, Ox, Tiger, Horse, Dragon, Dog, Pig, Rat, Snake, Goat, Monkey, Cat, and Rooster. The story goes like this:

The Ox, Cat, and Rat

Being reasonably intelligent but horrible swimmers, the Cat and the Rat rode at the back of the Ox to cross the river. The Ox, being kind and naive, allowed the two to hitch a ride on his back.

As they came close to the river bank, the Rat pushed the Cat off the Ox’s back and jumped towards the shore. The Rat hurriedly rushed to the Emperor and was labeled the first animal of the Chinese Zodiac calendar. The Ox settled for second place as the Cat drowned on the river. This incident was said to be why cats hunted rats.

The Tiger and Rabbit

The Tiger arrived third. It explained to the Jade Emperor that the river currents were pulling him downstream despite its strength and power.

A distant pounding sound signaled the arrival of the Rabbit. It described how it crossed the river: by nimbly leaping from one stone to another. It nearly lost the race halfway through, but luckily it managed to catch on to a drifting wood, which eventually washed him to shore. The Jade Emperor placed the Rabbit as the fourth animal in the Chinese Zodiac.

The flying Dragon came in fifth. The Jade Emperor was perplexed as to why the Dragon, a swift-flying creature, did not win. Thus, the Dragon explained that it was being held back because it had to stop by a settlement and bring rain for everyone.

Then, as it neared the goal, it noticed the poor Rabbit hanging to a driftwood. So it did a kind deed and gave the critter a puff of air to land on the shore. Finally, the Dragon was designated as the fifth animal because the Jade Emperor was astounded by its noble character.

The Horse and Snake

After appointing the Dragon the fifth place, the Horse arrived with a galloping noise. The Snake was concealed on the Horse’s hoof, and when it suddenly emerged, the Horse was startled and fell back a few steps, awarding the Snake the sixth place and the Horse the seventh.

The Goat, Monkey, and Rooster

The Goat, Monkey, and Rooster eventually arrived at the heavenly gate. They were able to cross the other side thanks to their joint efforts. The Monkey and Goat pulled and yanked at the weeds to clear the path for the raft the Rooster found.

As a result of their excellent coordination, the Jade Emperor designated the following positions to them. The Goat placed eighth, the Monkey ninth, and tenth place to the Rooster.

The Dog and Pig

The Dog was listed as the eleventh animal in the zodiac cycle. It should have been the best runner and swimmer, but instead, it preferred to play in the water, having almost failed to cross the finish line.

The Pig made an “oink” sound just as the Emperor was about to declare the race over. In the middle of the race, the Pig got hungry and stopped to eat. Then dozed off after filling its stomach. It was the final animal to arrive when it woke up, placing 12th overall in the race.

After getting a gauge of what personality attributes the Chinese Zodiac animals are based on, let’s look at what the year of the Rabbit has in store for us!

Although 2023 is the year of the Rabbit, individuals entering their zodiac birth year should be ready for adversity. Making “additional efforts” and “facing challenges head-on” is strongly advocated by astrologers. There won’t be much smooth sailing for the Rabbits this year, but “a rainbow will arrive after the storm.”

Chinese astrology predicts that the stars will influence the dragons’ fortunes, but experts say there is “no need to worry much” because the stars will lead you in the right direction. The development of your career will go without a hitch.

However, this year may put you into different challenges in the field of love. It’s ideal for single people to concentrate on their careers. Moreover, be careful to control your emotions in a relationship.

Snake’s fortunes will be generally stable, and 2023 “will develop smoothly in a positive direction.” Career growth is in the cards for Snakes, but it will come after repeatedly proving yourselves. There are also some unfavorable stars this year, so their impact will change how much luck is accessible.

For those born under the sign of the Horse, the year of the Rabbit could prove to be rather challenging. There will be many ups and downs in 2023, so you should take caution with your career. However, romance and love could be exciting and remarkably successful this year.

Those born under the sign of the Goat must follow a practical and pragmatic route. In this year of the Rabbit, aim to maximize opportunities. According to predictions, Goats’ career prospects are favorable because the four “pillar Gods will guide them.”

The year 2023 should be an overall good year in favor of the Monkey. Still, due to a strong, unfavorable celestial impact, you will need to remain alert throughout the majority of the year.

No matter how monotonous things seem in your work, it is best to stick with it. Any stagnation that does happen will only last a short while. Thankfully, love will go considerably smoother in 2023. You’ll be famous and well-liked by the people you aim to attract.

This year, those under the Rooster star are predicted to “struggle from the opposition.” Moreover, they are forecasted to have “particularly unfavorable luck.”

However, to overcome various obstacles, keep a positive outlook, and “make an even bigger effort than the previous year.” A Rooster’s “love forecast is good, though your job and financial predictions are not so fantastic.”

In 2023, those under the sign of the Dog will experience a relatively stable fortune since the good and negative components of your horoscope will cancel each other out, preventing anything from being either excessively destructive or overly optimistic.

For people born under the sign of the Pig, the year of the Rabbit is reasonably pleasant. In addition, the beginning of the year will bring the Pig some exciting work. Whether you are employed by a corporation or work on a business for yourself, you might realize that more responsibilities and projects will come your way.

There will be harmony in love and romance, and many of you may feel an exhilarating surge of passion. But it would be best if you took health and the possibility of property loss into consideration.

The year 2023 will be challenging for people born under the sign of the Rat.

In essence, one will bring on countless problems, minor illnesses, and even brief catastrophes for the Rat, while the others will lessen such issues and ensure they are manageable.

It would be best if you put increased effort and attention into your work this year. The goal for the Rat is to proceed with all endeavors cautiously and wisely. Making snap judgments is a big no-no, at least for 2023.

The Ox is ranked second, and the Rabbit is ranked fourth among the 12 zodiac signs in Chinese astrology. The second and fourth positions support one another, foretelling luck for the coming year. However, those born under the sign of the Ox are advised to work hard and “seize opportunities” to make your year “more fruitful.”

The Tiger will see a slight improvement in luck in the year 2023. Even though this isn’t particularly generous, it’s a solid base to build momentum in all facets of life.

Tigers must set their egos aside, reflect on their failures, and learn from them. Don’t forget to thank the people who assist you along the route. Being cautious with your spending and investments is advisable since there will be “some twists and turns in the process.”

What Chinese Zodiacs are the Luckiest in 2023?

The year of the water Rabbit is said to be lucky overall for the 12 zodiac animals. Moreover, after the eventful year of the Tiger, the year of the Rabbit is claimed to be one where things sober up and slowly settle.

However, the alignment of the stars this year will favor the other zodiacs more and will leave the fate of the others in their own hands. The luckiest zodiac signs this year are the Ox, Snake, and Tiger. Rabbit and Rat will have ups and downs in terms of luck, and finally, Rooster and Monkey will need to put more effort into maintaining or improving the status quo.

It’s normal to seek guidance when uncertain about the future. It’s human nature to venture and know the unknown, after all. However, it’s unreasonable to do nothing and accept what’s fated.

Horoscopes are similar to weather reports. Even though the weatherman reported that there’s only a tiny chance of rain, bringing an umbrella as a precaution won’t hurt. Life, after all, is unpredictable, and horoscopes, in that same regard, only help you prepare for what can happen. –WhatALife!/Vaughn