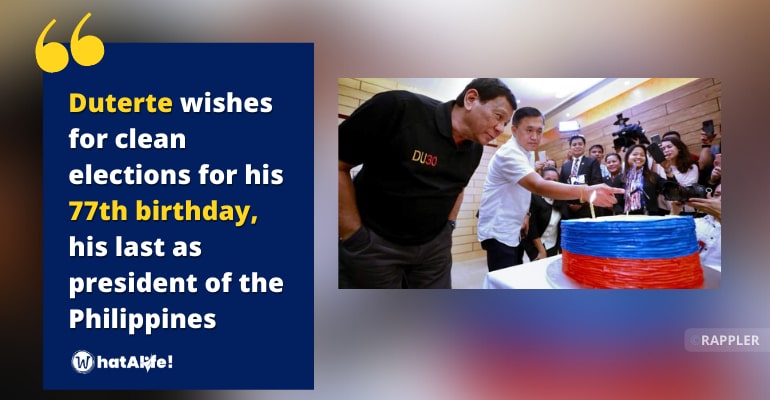 “His birthday wish for this year is to have a clean, fair, and honest election in May 2022, as he has time and again underscored the importance of a peaceful transfer of power as part of his enduring legacy,” acting presidential spokesperson Martin Andanar said in a press statement.

Andanar stated that Duterte will celebrate his birthday in Davao City in a simple and quiet manner.

Meanwhile, the acting Palace spokesman wished President Duterte a happy birthday alongside the rest of the country.

“Our prayer for the Almighty is to continue to provide the President good physical and mental health in the years to come so he may carry on serving the interest of and bringing betterment to the lives of Filipinos,” he said.

Andanar said that Duterte’s presidency has resulted in significant change for many Filipinos.

“We express our sincere gratitude to the Chief Executive whose strong and decisive leadership and genuine compassion for every Filipino have motivated officials in government and have resulted in positive and meaningful change to the lives of a great number of our people,” he added.

Except for his 75th birthday, Duterte has always spent his birthday in Davao City with his family.

In 2016, Duterte has become the oldest person ever elected to the Philippine presidency, at the age of 71. – WhatALife! / Francis