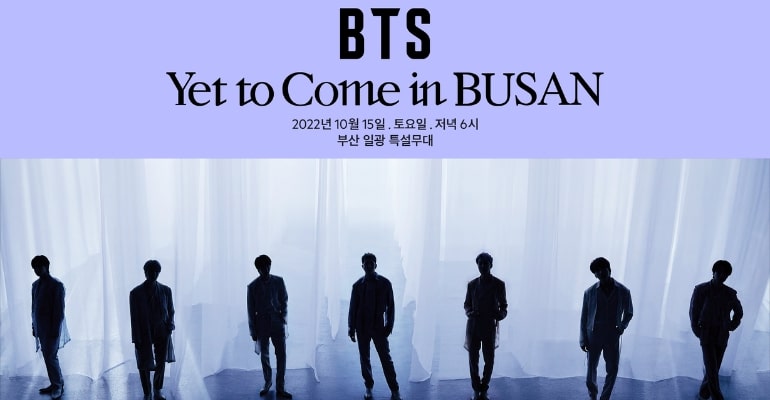 MANILA, PHILIPPINES — On Wednesday, August 24, as revealed by BIGHIT Music, BTS will perform live for FREE on October 15 in Busan at the Busan Ilgwang Special Stage.

The forthcoming performance is a part of BTS’ stint as South Korea’s official honorary celebrity ambassador for its bid to host the 2030 World Expo.

Admission to the concert is free, but anybody planning to attend must register through Interpark. More information will be released soon.

Tickets are free, but there will be reservation and shipping fees, and the performance will be live broadcast on Weverse, ZEPETTO, NAVER NOW, and LIVE PLAY for those who can’t make it to Busan.

“We hope that ARMYs across the world would demonstrate their support and interest in BTS’ unique stage to pray for the success of attracting WORLD EXPO 2030 BUSAN KOREA,” the statement said.

In addition, HYBE MERCH offered unique accommodation options with hotels close to the arena for those arriving outside Busan.

The most recent BTS performance was held in April in Las Vegas as a part of the group’s “Permission to Dance On Stage” tour.

Since June, when the bandmates declared a brief break from group activities to concentrate on solo work, the band has been on an official hiatus.

Save the date, ARMYs! –WhatALife!/Brix