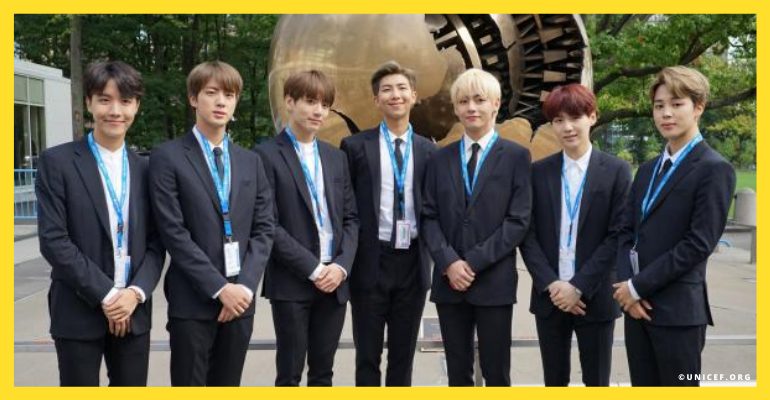 The septet will be accompanying S.Korea President Moon Jae-in to the 76th United Nations General Assembly in New York.

Will all the ARMYs please stand up for this cultural milestone? The group can now add Special Presidential Envoy for Future Generations and Culture to their mammoth list of achievements. President Moon Jae-in himself awarded their certificates of appointment at the Cheong Wa Dae (Blue House).

The certificates were awarded to the BTS members along with fist bumps from President Moon.

It turns out this wasn’t a spur-of-the-moment thing! President Moon has been eyeing BTS for the job ever since July! And it wasn’t a decision based solely on popularity. The boys have always been envoys in terms of culture.

President Moon cited that he was grateful to BTS for “greatly enhancing the dignity of the Republic of Korea by raising the stature of K-pop and K-culture.”

Not only that, BTS has been a recurring opening topic when it comes to dialogues with foreign leaders.

First lady Kim Jung-sook even noted that because of BTS’s popularity abroad, many foreigners have been studying the Korean language to understand the group’s songs better.

According to Yonhap News Agency:

Moon is also scheduled to attend the 76th session of the U.N. General Assembly. The president and the seven members of BTS plan to participate together in the second meeting of the Sustainable Development Goals Moment (SDG Moment) of the Decade of Action to be held on Monday. BTS will make a speech during the session, with a video clip of its performance played.

The United Nations website states that the SDG Moment of the Decade of Action on September 20, Monday, will tackle the 2030 Agenda for Sustainable Development and tackle urgent efforts against COVID-19. It will also “demonstrate that transformative change at scale is possible between now and 2030.”

As of this writing, the 76th session of the UN General Assembly is already open. The original opening date was September 14, the same day the septet became special envoys. However, the first day of the General Debates begins on the 21st.

Your fave might be verified on Twitter, but are they verified in the eyes of the United Nations?