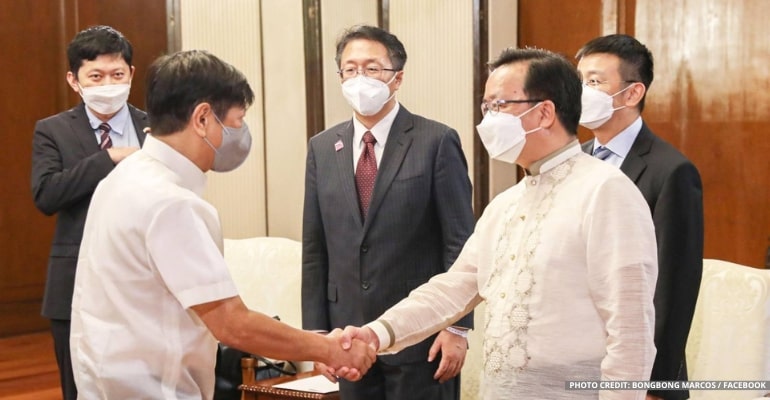 During the call, President Ferdinand “Bongbong” Marcos Jr. renewed his commitment to further strengthening ties between the Philippines and China.

In a Facebook post, Marcos stated, “We are very grateful for the visit, and we look forward to further strengthening the relationship between China and the Philippines for the benefit of both our peoples.”

Photos of the meeting with Huang were also uploaded on the President’s official Facebook page.

In May, after winning the 2022 elections, Ambassador Huang also met with Marcos to give him a congratulatory note on behalf of Chinese President Xi Jinping.

In the note, China conveyed its intent to “bring the two countries(‘) Relationship of Comprehensive Strategic Cooperation to new heights.”

Xi also pledged to improve the “strategic and long-term” bilateral ties between the two countries.

The Chinese president has promised to maintain the “strong relationship” between the Philippines and China and assured that they would continue the “great chapter of the China-Philippines friendship and cooperation for the new era.”

Earlier, the Chinese government invited Marcos to visit their country. The latter accepted the invitation during his meeting with Chinese Vice President Wang, but no concrete date has been set.

Marcos had a meeting on June 30 with Chinese Vice President Wang Qishan, and on July 6, he met with the Chinese State Councilor and Foreign Minister Wang Yi.

On Sunday, DOTr (Department of Transportation) announced that the Philippines had resumed renegotiation on China-funded transport projects.

The DOTr said that the Chinese government’s funding will “strengthen bilateral relations and enhance the partnership between the Philippines and China.” –WhatALife!/Zed

Also read: PBBM addresses the sugar shortage in the country