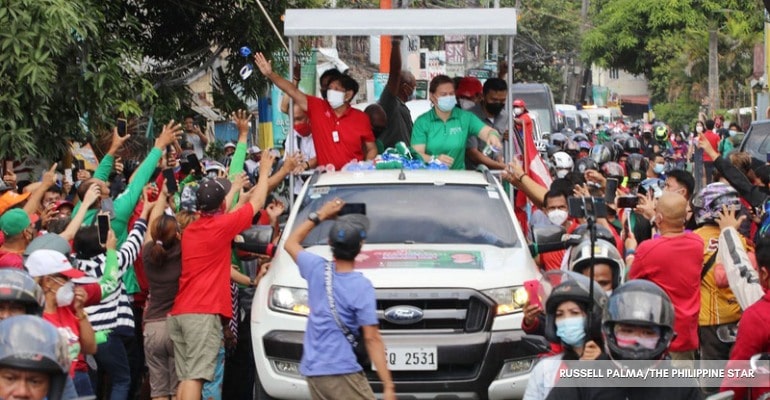 Only 2,400 people participated in the “Tugon ng Masa” in-person survey, which was conducted from April 22 to April 25. It also revealed that 62 percent of respondents in the Visayas support Bongbong’s presidential campaign.

The Visayas Regions, with 62 percent, showed the most grit, followed by Balanced Luzon, with 59 percent, Mindanao, with 56 percent, and the National Capital Region, with 46 percent.

Vice President Leni Robredo, on the other hand, came in second place. Robredo’s countrywide vote increased from 22 to 25% from the previous OCTA poll. All contributed to the increase in support from Metro Manila (19 percent), Balanced Luzon (28 percent), Visayas (28 percent), and Mindanao (12 percent).

Meanwhile, Leody De Guzman and Norberto Gonzales both got 0.2 percent of the vote.

(Who would you vote for President if the elections were held today?)

According to OCTA Research’s survey, Bongbong’s running mate, Mayor Sara Duterte, has maintained her lead in the vice-presidential race.

A total of 2,400 people responded to the survey, which was conducted during the same period.

Senate President Vicente Sotto III came in second with 22 percent (from 23 percent in the previous poll) while Senator Francis Pangilinan came in third with 16 percent (from 12 percent ).

Willie Ong, on the other side, received 4 percent of the vote countrywide, while Lito Atienza received 1 percent.

Other candidates got less than 1% of the vote.

Meanwhile, when asked if this would reflect in the May 9 polls, OCTA fellow Dr. Guido David reiterated that the country cannot declare a winner solely on the basis of poll findings. After that, he urged people to “go out and vote” on May 9. – WhatALife!

Also Read: How to Vote during the Pandemic for the May 9 Elections 2022