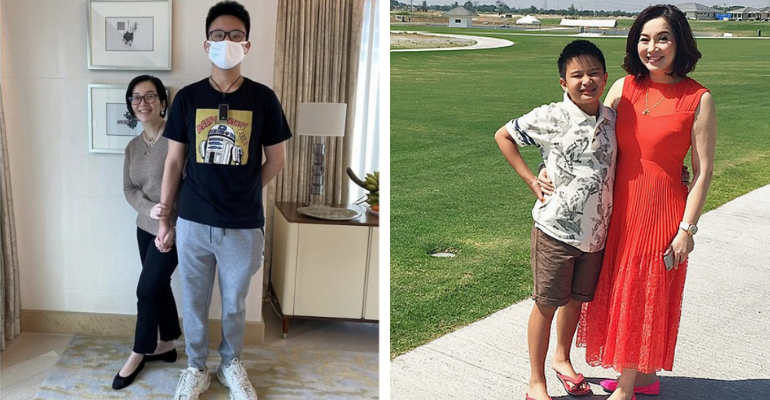 Kris Aquino posted a photo of his 13-year-old youngest son James Carlos Aquino Yap Jr., fondly known as Bimby, and many were shocked at how tall he is now.

Aquino shared on Friday, October 2, an adorable post showing just how much Bimby has grown and how he’s almost as tall as his 25-year-old brother, Joshua, who is more than 6 foot tall.

She then followed it up with a post of them being joined by Joshua. “My towers of love,” she wrote.

It was Aquino’s first post on Instagram since September 14, a week after she shared an update on their negative COVID-19 test and her canceled TV comeback.

About early September, Aquino compared the heights of Bimby and Joshua. She estimated that Bimby is now 6 foot tall, considering that he’s barely below Joshua, who stands at 6-foot-2.

She explained that, yes, DNA is a significant factor but underlines that Bimby’s remarkable growth is also credited to how he starts every day with a big glass of fresh milk.

Celebrity friends of the Aquino commented on how surprised they were on Bimby’s growth, including James Yap, the PBA two-time MVP of Rain or Shine and Bimbi’s father.

When a local broadsheet newspaper contacted Yap, the 38-year-old PBA superstar said it had been a while since he last saw his son with his ex-wife, and he was surprised to see him grew taller.

“When I last saw him, he’s still little, that’s why I was surprised to see him tall now,” Yap said in Filipino.

What do you think? Let us know in the comments down below!