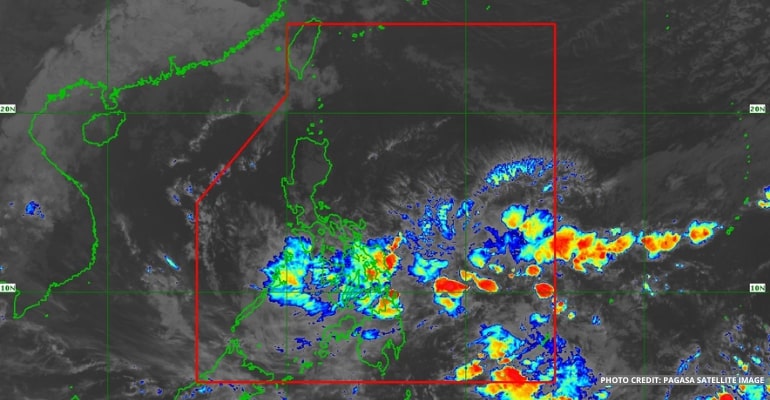 WEATHER UPDATE — According to the Philippine Atmospheric, Geophysical, and Astronomical Services Administration (PAGASA), the Low-Pressure Area (LPA) being monitored has been spotted 380 km east of Surigao City, Surigao del Norte. In addition to the LPA, two weather systems, the Northeast Monsoon and the shear line, are affecting the country.

The weather agency reports the LPA still has a low chance of turning into a tropical storm. However, it will continue to bring rain over Visayas, Mindanao, and even Southern Luzon.

As the shear line strengthens the rain over Southern Luzon and Visayas, the Northeast Monsoon or Amihan affects the Northern and Central portions of Luzon.

The shear line and LPA are forecast to continue bringing rains over the country over the weekend.

For today’s weather forecast, light to moderate with, at times, heavy rains is expected over Southern Luzon, including Romblon, Sorsogon, and Masbate. Camarines Norte, Camarines Sur, Albay, and Catanduanes are forecast to experience rains from the afternoon until evening.

The rest of Central Luzon, CAR, Metro Manila, and Calabarzon will experience the same weather as yesterday, with sudden outpours of rain caused by the Northeast Monsoon.

Heavy rains continue to affect Visayas, especially in the eastern and central portions, including Negros Occidental. This is due to the combined presence of the LPA and shear line. As a result, residents are warned against flash floods and landslides.

The rest of Western Visayas is forecast to experience light to moderate with, at times, heavy rains.

The rest of Mindanao is forecast to have partly cloudy to cloudy skies. Areas in southern Mindanao may expect scattered rainshowers and thunderstorms brought by the LPA.

The weather agency also reminds the public that, per DEPED guidelines, classes are suspended in areas with Orange Rainfall advisories.

PAGASA continues to issue a gale warning to areas in Luzon and Eastern Visayas. Waves are expected to reach up to 4.5 meters. See the full list below:

Watch the 5 am weather update today below: