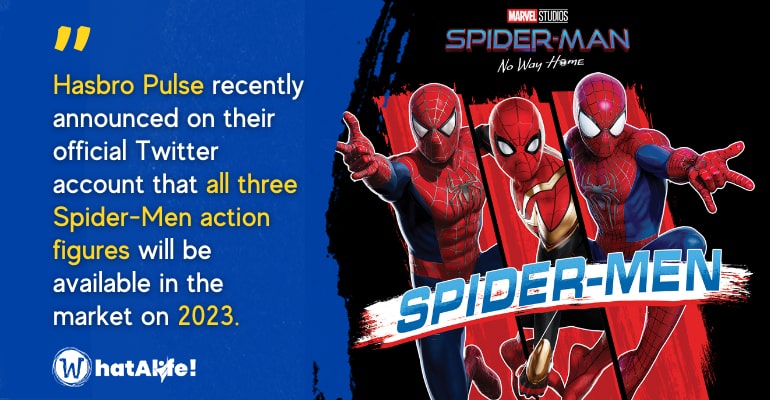 On the day Marvel’s Spider-Man: No Way Home arrives on 4K Ultra HD and Blu-ray, there’s also an update on when fans will see new toys and merchandise from the blockbuster film.

The wait will be long but worth it for fans.

Hasbro Pulse, official online store seller for American, British, and Canadian customers looking for a seller of toy lines, such as the Transformers Generations collector line, recently announced on their official Twitter account that the Marvel Legends figures for all three Spider-Men – Peter 1 (Tom Holland), Peter 2 (Tobey Maguire), and Peter 3 (Andrew Garfield), will be available in the market on 2023.

After the announcement, Marvel’s superhero movie trends on Twitter with the hashtag, ‘SpiderManNoWayHome.’

The official Twitter account of ‘Spiderman: No Way Home’ also posted an announcement stating that the popular film is now available on Blu-ray, 4K Ultra HD, and Digital.

In the popular film, Peter Parker’s identity as the titular hero is exposed, which puts his responsibilities as a superhero in conflict with his life as a civilian and endangering those around him.

The story also shows him seeking the aid of Doctor Strange but their spell was unsuccessful and instead releases evil villains Spider-Man has fought from other dimensions. Here, Peter has to confront his greatest challenge, which puts his future and the multiverse at risk. – WhatALife!