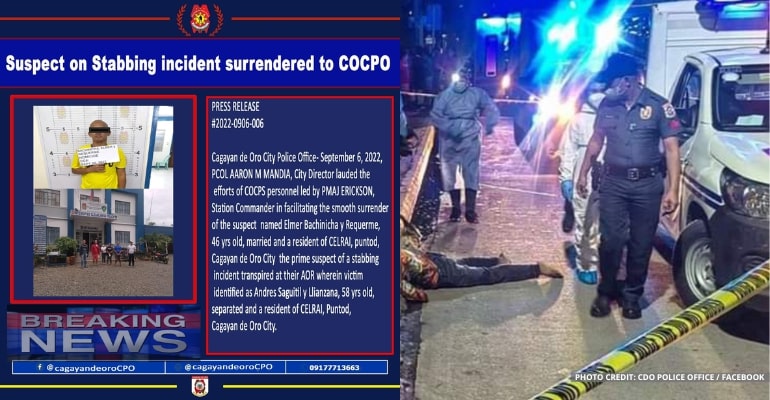 CAGAYAN DE ORO CITY, PHILIPPINES — On the dawn of September 5, 2022, 58-year-old local trader Andres Llansana, operator of a vegetable store and a vulcanizing shop, was found killed at his place in Cyril, Barangay Puntod, by a gaping wound on his neck. Later, the suspect Elmer Bachinicha surrendered to police after negotiation.

Llansana had separated from his wife around ten years ago and has since rented a space to live in Puntod.

The victim was last seen drinking with his friend Elmer Bachinicha in another neighborhood, but no one could contact the latter after the incident. Reports indicated Bachinicha, also known as ‘Loloy’ to some, to be the owner of the place rented by the victim.

(He is our suspect for stabbing our father to death in the neck because they were last seen drinking.)

Ivan also said his father had no known enemies and was usually friendly, except that he would become “loud” and “noisy” when under the influence of alcohol.

One day and one night to catch the suspect

Having located the suspect in Gingoog City a day and one night after the incident, the police successfully negotiated for the 46-year-old Bachinicha to surrender himself. Subsequently, he was turned over to the CDO Macabalan Police Station.

Bachinicha was charged with homicide, and “the case has been solved,” as Police Lieutenant Colonel Surki Sereñas said.