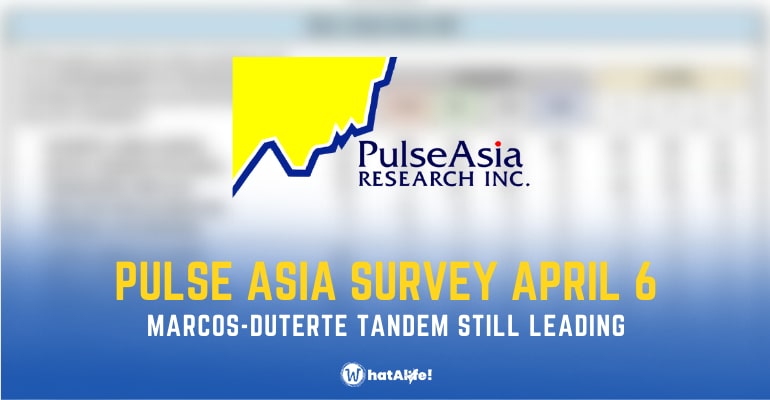 The survey, which included 2,400 participants aged 18 and over, was conducted from March 17 to 21 and released on Wednesday, April 6.

According to the latest Pulse poll, if elections were held within the survey period, 56% of voters would choose Marcos Jr. as president, down four points from his February 2022 numbers.

On the other hand, Vice President Leni Robredo’s support has risen nine percentage points to 24% from 15% in February.

According to Pulse Asia, Marcos’ electoral support dropped in Class D (-5 percentage points), whereas Robredo’s vote numbers climbed not just in the Philippines as a whole (+9%), but also in the remainder of Luzon (+14 percentage points), Mindanao (+9%), and Class D (+10 % points).

Duterte-Carpio received 56% of the votes in the survey, which was conducted from March 17 to 21, increasing three percentage points from her February score.

Duterte-Carpio also gained well in her home province of Mindanao, according to the polls, with 83% of respondents voting for her. She also won in Metro Manila with 56%, Balance Luzon with 44%, and Visayas with 50%.

Meanwhile, Sotto dropped four percentage points from February to March, from 24%to 20 %.

“The rest of likely voters are undecided about whom to elect as the next Philippine vice-president (2%), are not voting for any candidate for the post (1%), or refuse to identify their choice for vice president (0.4%),” Pulse Asia stated.

“For the period February 2022 to March 2022, the only marked changes in first-choice voter preferences for vice-president are recorded by Senate President Sotto and Senator Pangilinan. Support for the former eases in the rest of Luzon (-9 percentage points) while the reverse occurs in the latter’s case (+9 percentage points),” it added. – WhatALife! / Francis