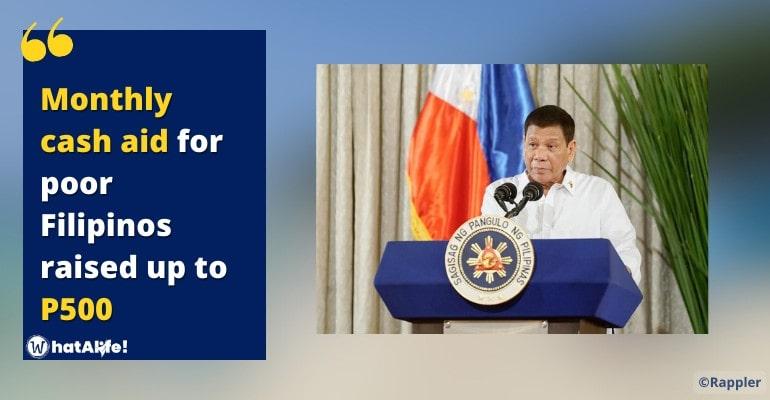 MANILA, PHILIPPINES — President Rodrigo Duterte stated on Monday (March 21) that the government’s monetary assistance to poor Filipinos, which had earlier been approved at P200, has been increased to P500.

Duterte remarked in an address at Malacañang Palace that he received input “from the ground” that the PHP200 monthly financial assistance was “too small” to support the family of three to five members.

“Sabi ko kay [Finance Secretary] Sonny [Dominguez], it will be an uphill battle for the next generation kung gawain natin ng P500. I hope that this would go a long way really to help, huwag nang sayangin sa e-sabong,” he added.

He stated that getting funding for the fuel subsidies would’ve been up to the next administration.

Duterte also urged on leaders and government workers involved in governance to guarantee that the rule of law is preserved and that laws are implemented efficiently.

The government aims to distribute the monthly subsidies to beneficiaries within the month, according to Malacañang last week.

Acting Presidential Spokesperson Martin Andanar stated that the monetary assistance will be granted on top of the Pantawid Pamilyang Pilipino Program (4Ps) targeted cash grant of up to PHP3,450 per month.

The choice to provide a monthly fuel subsidy coincided with Duterte’s decision to keep the excise tax on various fuel items. – WhatALife!