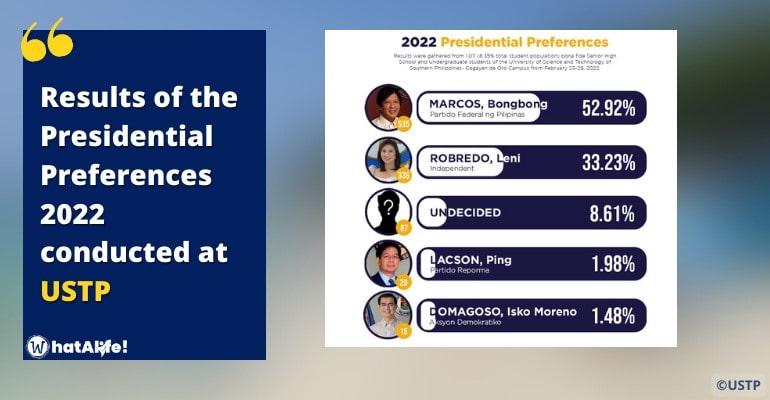 The organizations declare to represent the students who support the university’s objective of enabling the future generation, nation-building, and the right to vote.

This Online Mock Election attempts to demonstrate the university’s diversity. To show that everyone respects each other regardless of one’s political view.  In addition, it promotes free, secure, and fair elections in May 2022.

The Department of Research and Information (DRI) devised and implemented a number of measures to assure the mock election’s authenticity.

A total of 1,133 votes were cast in the six-day simulated election. All undesirable votes that did not satisfy the DRI’s criteria were filtered using a two-step verification process. The 1,133 votes were reduced down to 1,011 votes after extensive inspection by DRI and the SITE – Programmer’s Varsity.

Meanwhile, Manny Pacquiao gained 0.69% of the votes, Ka Leody with 0.59%, Ernie Abella with 0.20%, and Norberto Gonzales with 0.10%. Both Mangondato and Montemayor did receive any votes, and there were also 0.20% of voters who abstained.