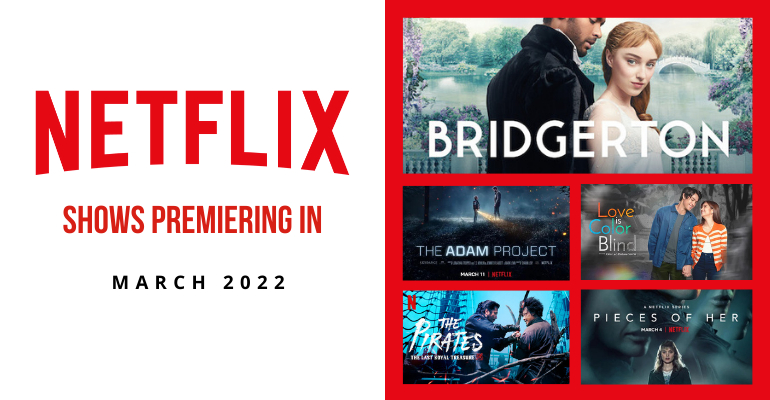 Netflix Shows in the Philippines for March 2022 – Season 2 of the hit series Bridgerton is finally coming to Netflix on March 2022! Other new films, such as The Adam Project starring MCU actors Ryan Reynolds and Mark Ruffalo, will also premiere this month.

Netflix Philippines has released the upcoming list of shows and films for March 2022. Check out the titles below (with official synopsis from Netflix and others) to add them to your watchlist.

Young artist Ino (Donny Pangilinan) becomes colorblind following an untimely accident. His best friend Cara (Belle Mariano), who is secretly in love with him, decides to help bring color back into his life in her own way. But they soon learn that the path to love is not a straight one… especially when other parties get involved.

My Roommate is a Gumiho

An iQiyi Original. “My Roommate Is A Gumiho” is a romantic comedy that tells the thrilling and loving story of a nine-tailed fox who wants to become a human, Shin Woo-yeo, in order to retrieve the fox bead which has been protected by him for 999 years, is forced to live together with the cheerful female college student who accidentally swallowed it.

A Lionsgate Film. When renowned crime novelist Harlan Thrombey (Christopher Plummer) is found dead at his estate just after his 85th birthday, the inquisitive and debonair Detective Benoit Blanc (Daniel Craig) is mysteriously enlisted to investigate. From Harlan’s dysfunctional family to his devoted staff, Blanc sifts through a web of red herrings and self-serving lies to uncover the truth behind Harlan’s untimely death.

Birds of Prey (And The Fantabulous Emancipation of One Harley Quinn)

A Warner Bros. Film. Birds Of Prey And the Fantabulous Emancipation of One Harley Quinn is a twisted tale told by Harley herself, as only Harley can tell it. When one of Gotham’s most sinister villains, Roman Sionis, and his sadistic right-hand, Zsasz, put a target on a young girl named Cass, the city’s wicked underbelly is turned upside down looking for her. Harley, Huntress, Canary and Renee Montoya’s paths collide, and the unlikely foursome have no choice but to team up to take Roman down.

A woman pieces together her mother’s dark past after a violent attack in their small town brings hidden threats and deadly secrets to light.

After accidentally crash-landing in 2022, time-traveling fighter pilot Adam Reed teams up with his 12-year-old self on a mission to save the future.

A Warner Bros. Film. “Dunkirk” opens as hundreds of thousands of British and Allied troops are surrounded by enemy forces. Trapped on the beach with their backs to the sea they face an impossible situation as the enemy closes in.

March 15: Adam by Eve: A Live in Animation

Anime, live action and music by cutting-edge artist Eve — all weave together into this dreamlike sonic experience inspired by the story of Adam and Eve.

A man breaks into a tech billionaire’s empty vacation home, but things go sideways when the arrogant mogul and his wife arrive for a last-minute getaway.

Lady Whistledown returns for Season 2 of Bridgerton March 25, 2022, only on Netflix.

A Warner Bros. Film. Thirty years after the events of the first film, a new blade runner, LAPD Officer K (Ryan Gosling), unearths a long-buried secret that has the potential to plunge what’s left of society into chaos. K’s discovery leads him on a quest to find Rick Deckard (Harrison Ford), a former LAPD blade runner who has been missing for 30 years.

An iQiyi Original. This tells the story of a the protagonist who is full of justice but lives the old-fashioned life of a criminal police. One day, another personality “K” with a different personality in his body wakes up to eradicate corrupt police and embody social justice.