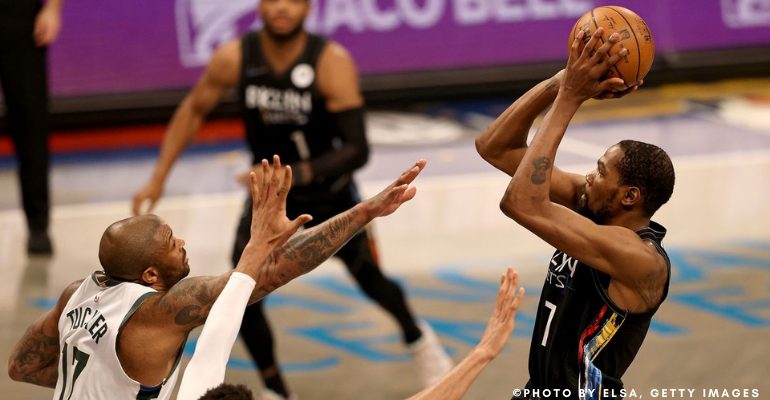 Things are not looking good for the Milwaukee Bucks as they suffered an embarrassing defeat against the Brooklyn Nets on Monday night, June 7.

The Nets brushed aside Milwaukee by gaining a 125-86 victory in Game 2 of the Nets vs Bucks. The disparity in score has made the No.3 seed in the Eastern Conference an easy target for criticism.

Brooklyn thrashed the Bucks in Game 2 of Nets vs Bucks

The Bucks are down 2-0 as the series heads back to Milwaukee. The difference in score was too great, and the unexciting performances by Giannis Antetokounmpo and other players led to their humiliating defeat.

It was a 39-point grubbing, which gave the Nets a controlling 2-0 lead in their Eastern Conference semifinal series. In fact, the 125-86 win was the largest in Brooklyn’s playoff history.

To open the Nets vs Bucks game, Kyrie Irving hit a 3-pointer, and soon the Nets led with 10 points. By the end of the first quarter, it became 17 points. Milwaukee was never able to gain control of the game. At one point, Brooklyn’s lead was 49 points.

Although Giannis Antetokounmpo played well in the opening game of the series with 34 points on 24 shots and 11 rebounds, the problem was that the Nets just brushed it off. They completely ran over Milwaukee. They were too strong for the Bucks defense as they shot 50% from 3-point range.

Durant played amazingly in the Nets vs Bucks game. Milwaukee could not stop him as the former MVP posted 32 points and 6 assists in 33 minutes. He has no weak spots as an offensive player because he can score from anywhere on the floor.

Although P.J. Tucker is stronger, Antetokounmpo is taller, and Jrue Holiday is quicker, Durant is able to counter all three defensive players. LeBron James himself even praised his brilliant ball-handling when he tweeted about the exceptional crossover Durant pulled off over the reigning Defensive Player of the Year, Giannis Antetokounmpo, in the Nets vs Bucks game on Monday.

Durant has been outstanding this season and has carried the same performance into the postseason. He averages 29 points in his career throughout the NBA playoffs. Brooklyn will definitely be relying on him in the later stages of the series to help them get the Championship.