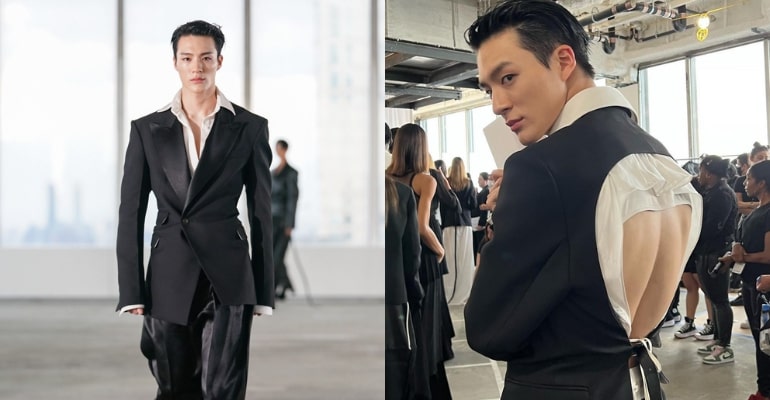 The K-pop star appeared in Peter Do’s Spring/Summer 2023 collection, which was crafted in New York. Do posted a video of Jeno’s runway outfit on Instagram. At the same time, he also shared a reel of Jeno’s look for the runway in a black backless ensemble cinched with a trailing belt and highlighted by side-slit trousers.

“Indeed, it was a natural choice to have Jeno open the show,” the designer said in an earlier press release.

“Jeno embodies the Peter Do man with multifaceted, confident, and a trailblazer,” he added.

The fans were highly ecstatic by his look.

One said, “Congratulations, JENO, for being the FIRST K-POP IDOL to open a New York Fashion Week show! May this opportunity open new doors for you, you did amazing, and we’re very proud.”

Another said, “as always.. the most handsome in the entire universe. JENO OPENS NYFW RUNWAY”.

Do, who collaborated with Jeno’s management company SM Entertainment, said his runway show also featured other label stars. In addition to Seulgi from Red Velvet, Shohei and Eunseok of SM ROOKIES, the label’s pre-debut training team, will also walk the runway.

Jeno also attended the Vogue World celebration of Vogue’s 130th anniversary just before the runway show. Along with other attendees, the idol posed with Sabrina Carpenter, Jared Leto, Elle Goulding, and Dove Cameron.

On his Instagram, Jeno shared a photo with designer Do, saying that “it was a special [moment].”

The South Korean boy band, NCT’s third sub-unit, was formed by SM Entertainment in 2016. However, when all of the group members reached the legal age of majority in South Korea in 2020, they started a rebranding effort to distance themselves from their youthful image.

The subunit made its debut on August 25, 2016, with the single “Chewing Gum” and a lineup of seven members, with an average age of 15.6 years: Mark, Renjun, Jeno, Haechan, Jaemin, Chenle, and Jisung.

NCT Dream was one of the top 10 physical sellers in 2019, courtesy of the commercial success of their 2019 extended play (EP), “We Boom,” which also helped them win Bonsang awards at the 34th Golden Disc and the 2020 Seoul Music Awards. –WhatALife!/Brix