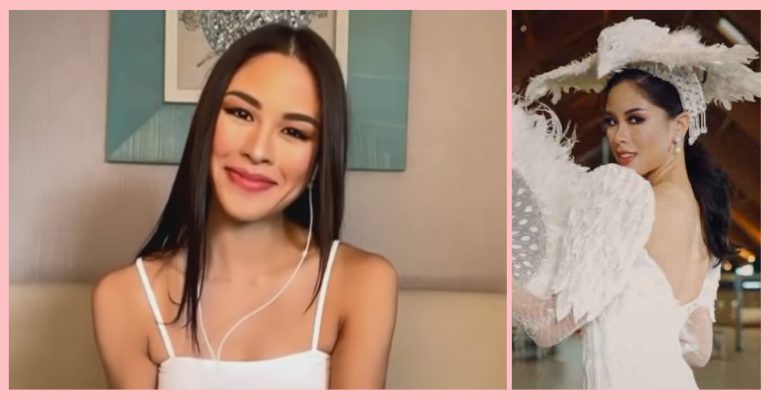 Kisses Delavin made a virtual appearance on Unang Hirit earlier today, October 5, 2021, to catch up on things.

Unfortunately, kisses failed to take home the crown during the Miss Universe Philippines competition on September 30. Yet, she remains bright and bubbly.

Kirsten Danielle Delavin, better known as Kisses Delavin, was a guest on the GMA morning talk show Unang Hirit. During her interview, she revealed she was still in Bohol, where the Miss Universe Philippines competition was held.

Additionally, Delavin stated that she was feeling “grateful.” This was even though she only made it to the Top 10 that fateful coronation night. Additionally, a host brought up the topic of a viral video of the Miss Universe PH finalist crying after the competition. Delavin replied:

(Translated) “Backstage, there were many emotions. I think all of us cried. Because all our [families] were there, and then we remembered our designers, all of the fatigue, the friendship. It’s such a wonderful feeling, when the pageant was over, not because you want it to be over, but because you realize how much you gained.

“But of course, I just want to share that I got sad too, because I got especially close to my sisters. Unlike me, who can still join again because I’m just 22, others are already 28, so not everybody can join again. And I got sad too, for that. But I’m so happy to meet my sisters in Miss Universe Philippines.”

Then the conversation turned to the Miss Universe Philippines finalist’s secrets for slimming down. As it happens, Kisses Delavin lost six kilos within two months, giving her the Miss Universe-level figure she has today.

In a video from Carrie Delavin, Kisses’ mother, we see the Miss U Philippines finalist doing planks on what seems to be a living room floor. Kisses explained that before deciding to compete, she was still doing the pandemic routine of eating well and sleeping well (honestly, same!)

After she signed up for the high-profile beauty pageant, she dedicated herself to chiselling her figure. Additionally, she had a nutritionist on board to help her with her diet.

Her answer to the dream food she ate right after the end of coronation night? Crispy Pata. Very relatable!

Other topics covered were Kisses’ famed Miracle Walk, as well as the outpouring of love from previous Miss Universe Philippines winners, chief among them Pia Wurtzbach, Miss Universe 2015!

Rabiya Mateo, Miss U 2020, and MJ Lastimosa, Miss U 2014, also have had wonderful interactions with Kisses.

Kisses won’t represent the country in Eilat for the Miss Universe international competition. However, the Kissables and beauty pageant fans won’t be left hanging!

“I will continue in this path, that is for sure,” according to the Miss U 2021 finalist.