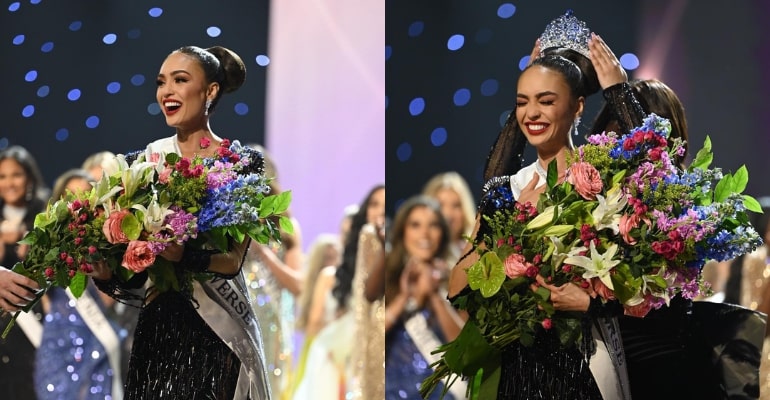 USA — The 71st Miss Universe concluded yesterday, January 15, 2023, with a win for the USA and an unexpected loss for the Philippines. Here’s a quick recap of the most beautiful day in the universe.

Despite the staggering support she received from Filipino fans and fellow beauty queens, Celeste Cortesi failed to secure a spot in the Top 16 during the coronation night of the 71st Miss Universe.

Many Filipino fans were shocked by the turnout but showed their support for the beauty queen nonetheless through social media.

The following is the full list of the Top 16 candidates:

Here are the Top 5 finalists:

After much deliberation, the Top 3 finalists were:

R’Bonney Gabriel, a fashion designer, model, and sewing instructor from Texas, was crowned as Miss Universe on Saturday night.

Gabriel is also the first Filipino-American to win the Miss USA title.

Read her winning answer to the question, “If you win Miss Universe, how would you work to demonstrate this as an empowering and progressive organization?” below:

“Well, I will use it to be a transformational leader. As a very passionate designer, I’ve been sewing for 13 years. I used fashion as a force for good. In my industry, I’m cutting down on pollution through recycled materials when I make my clothing. I teach sewing classes to women to help them survive human trafficking and domestic violence. And I say that because it’s important to invest in others, invest in our community, and use our unique talent to make a difference. We have something special and we can plant those seeds to [time’s up by this point] other people in our life. We transform them and we use that as a vehicle for change.”

The Miss Universe loss shocked many Filipinos, who are well-known for being avid pageant fans. After all, there were plenty of theories and forecasts wherein Cortesi would enter the finals of the prestigious pageant.

As the social media capital of the world, Filipinos went to social media to share their disappointment. Many offered their support to Cortesi, while others reverted to memes to lighten the situation.

Check out some of them below:

Even personalities like Vice Ganda were not happy with the results. See their series of tweets below:

Meanwhile, Miss Universe 2018 Catriona Gray, who was one of the hosts, gracefully consoled the candidates, including Cortesi, who were not called for the Top 16. She assured everyone, saying, “we always have next year.”

If there’s also one thing that helped console Filipinos, it’s the thought that Thailand was also unable to land a spot in the Top 16. Filipino and Thai fans have been in a social media clash when it comes to pageantry, mainly with the Miss Universe crown.

See some of the memes below:

Congratulations to R’Bonney, and we are still proud of you, Celeste! – WhatALife!