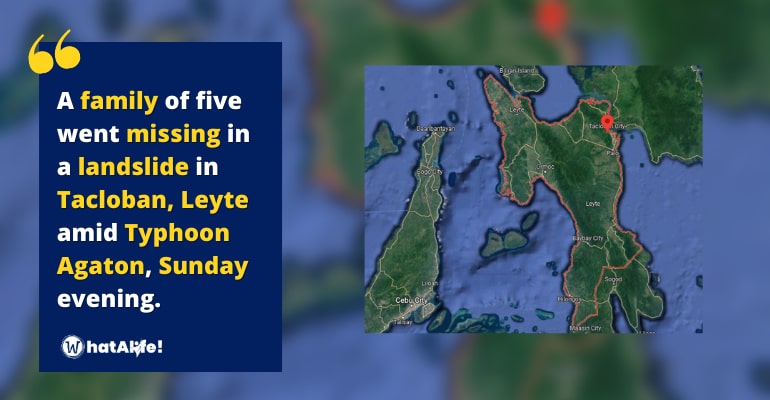 LEYTE, PHILIPPINES — As tropical storm ‘Agaton’ continued to strike the eastern section of the central Philippines on Sunday afternoon, a family of five went missing in a landslide in Can-Ipa, Baybay City.

Around 5 a.m., rescuers returned to the landslide site to resume the search. The Philippine National Police (PNP) issued an update to the media on Monday after the search came to a stop Sunday night because of poor vision and heavy rains brought on by “Agaton.”

“Responders found that the house was already covered with soil and victims were trapped inside. Status of the victims has not yet been confirmed,” the PNP stated.

Local government officials guaranteed that the City Government of Baybay had been on the ground, watching the situation and preparing to respond to all reports received by the city government, including the evacuation of citizens living near the ocean.

Due to days of heavy rain in the region since April 7, various flooding incidents and minor landslides have been confirmed in several municipalities in Abuyog, Leyte.

Meanwhile, Diane Salasayo, a netizen, has requested assistance in rescuing her family from the Minahal Kita Native Restaurant in Brgy. Can-Ipa.

Two rescue teams attempted to remove them, but the truck was unable to reach them due to the strong flood current.

At 8:00 a.m., the center of “Agaton” was detected over the coastal seas of Tanauan, Leyte on Monday.