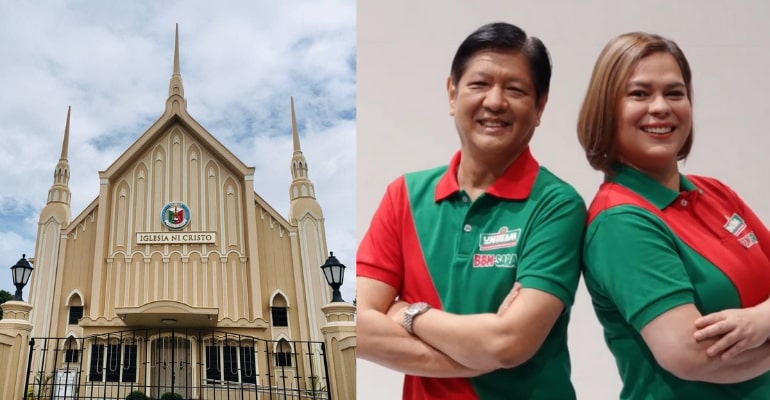 (Iglesia ni Cristo is announcing the deserving candidates it is backing after extensive research and study.)

Over 2 million voting INC members are expected to vote for the candidates recommended by the church officials.

INC’s official support for the Marcos-Duterte party was declared on the sect’s broadcaster NET 25’s primetime evening news program just a week before the elections.

It also announced support for the 12 senatorial candidates listed below:

“We will value the support you have given to us just like the support of the majority of our fellow Filipinos. This kind of trust will serve as a guide to presidential frontrunner Bongbong Marcos and vice-presidential leader Inday Sara Duterte in leading our nation should they win in the upcoming elections on May 9,” he said.

Marcos also expressed gratitude to the church for its support.

(My entire family and I, as well as all members of UniTeam, are grateful to Iglesia Ni Cristo and its leader, Eduardo V. Manalo, for their support.)

Marcos was also endorsed by the religious group way back in the 2016 vice presidential race, where he was narrowly defeated by Robredo, who is also now running for president.

According to the most recent Pulse Asia preference survey, former senator Ferdinand “Bongbong” Marcos Jr. stayed on top among presidential contenders, a week before the May 2022 national and local elections.  – WhatALife!