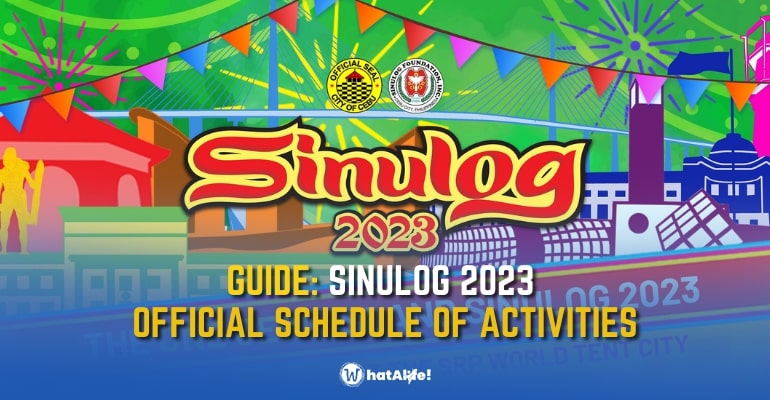 One of the biggest festivals in the country is back! Check out the complete schedule of activities of Sinulog 2023 by Sinulog Foundation Inc. (the official organizer of the yearly festival) below:

Check out the official post by Sinulog Foundation Inc. below:

What is Sinulog Festival: A Short Summary Of How Sinulog Came To Be

History reveals that Cebuanos conducted dances resembling the Sinulog to celebrate animist idols long before Christianity was introduced to the archipelago. The religion was first introduced in Cebu by Ferdinand Magellan’s arrival, who led a Spanish expedition on April 7, 1521.

The Cebuano word “sulog” is where the festival’s name of “Sinulog” originated. Sulog means water current, and Sinulog roughly translates to “like water current,” which describes the forward-backward moves of the dance, imitating river flow.

Nowadays, Sinulog is celebrated in festive outfits while performing the ritual-prayer dance to honor Señor Santo Niño or the Child Jesus. In addition to the festival’s religious aspect, there are music fests, pageants, night markets, and many more!

Once the opening is done, a Grand Parade will be held from 9 am until sunset, where devotees will dance and celebrate while riding the people’s current. Then, the Grand Finale of all the previous events will be held with a fireworks display afterwards.

If you’re not tired, a street party after all those events will surely make your body sore the next day! Not a dancer and would prefer listening to performers? A music festival is also happening a few blocks away!

The Sinulog 2023 is a full comeback of the festivities filled with in-person events. So, make sure to enjoy this time as it will surely be one of the best Sinulog of all time! –WhatALife!