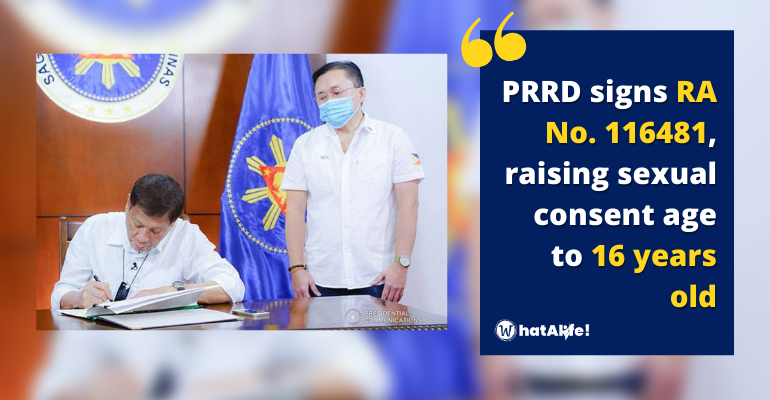 MANILA, Philippines — President Rodrigo Duterte recently signed a bill raising the age of sexual consent from 12 to under 16 years old, making anyone who participate in sexual activity with youngsters under the new age limit responsible for statutory rape.

On Monday, March 7, Malacanang issued RA No. 116481, an act “providing for enhanced protection against rape, sexual exploitation, and abuse, and increasing the age for determining the commission of statutory rape.”

Republic Act (RA) 116481 modifies RA 3815, the Revised Penal Code, and RA 7610, or the Special Protection of Children against Abuse, Exploitation, and Discrimination Act, which Duterte signed on March 4.

“Children, whether male or female, who for money, profit, or any other consideration or due to the coercion or influence of any adult, syndicate or group, indulge in sexual intercourse or lascivious conduct, are deemed to be children exploited in prostitution or other sexual abuse,” the law said.

A person who has carnal knowledge of another person commits rape “where the victim is under 16 years of age or is demented, even if none of the circumstances specified above are present.”

“Provided, further, that when the age difference between the parties is not more than three years, and the sexual act in question is proven to be consensual, non-abusive, and non-exploitative, there shall be no criminal liability on the part of a person having carnal knowledge of another person under 16 years of age: Provided, further, that if the victim is under 13 years of age, this exception shall not apply,” it added.

The legislation, however, says that if the victim is under the age of 13, the exemption does not apply.

Prior to the law’s passage, the Philippines’ minimum age for sexual consent was 12 years old, the lowest in Southeast Asia and one of the lowest in the world.